The official Oktoberfest 2017 beer prices have been announced by the city of Munich on Tuesday, with a Mass (1 litre) of beer remaining under 11 Euro in all beer tents.

Thirsty visitors will be paying 10.95 Euro at the Fischer-Vroni, Paulaner-Festzelt and Schottenhamel-Festhalle – the most expensive beer this year. The cheapest beer, at 10.60 Euro, is available in just 2 of the smaller tents.

Always a contentious issue, beer prices at Oktoberfest cause much resentment in Germany every year. In Bavaria they even make the headlines when announced. 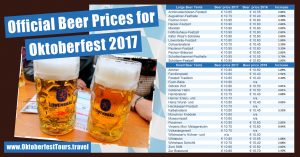 While the beer price increase is very modest compared to previous years (in 2003 the average beer sold for just 6:30 Euro), non-alcoholic drinks will see the biggest increase in price. A litre of drinking water will cost on average 8.73 Euro (yes, you read that right), an increase of 46 cents compared to last year. A litre of lemonade will cost revellers an eye-watering 9.55 Euro.

Our tip? Stick to the beer of course. Except the Weissbier (wheat beer) at the wine tent, which will set us back 15.60 Euro.

Ready to raise a beer at Oktoberfest 2017? Join us in the beer tents! 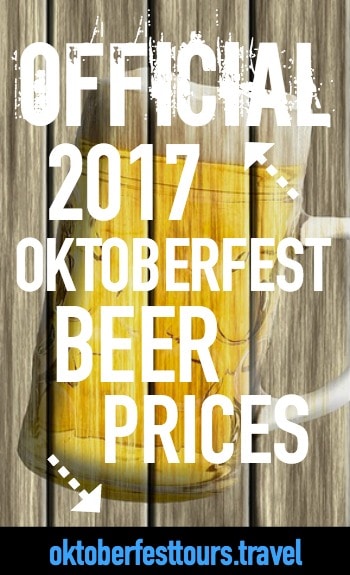