Home  /  Fun Stuff about Oktoberfest  /  Beer prices at the 2019 Oktoberfest: How are they determined?

Beer prices at the 2019 Oktoberfest: How are they determined?

The official beer prices for Oktoberfest 2019 have been announced so you know what that means… IT’S ALMOST OKTOBERFEST TIME WOOOOOO! I mean it – it’ll be here before you can say Vergangenheitsbewaeltigung which, by the looks of it, is going to be about ten years.

The cost of beer each year is a hotly awaited announcement in Munich and beyond. However, the prices are determined not by the city officials themselves, but by the beer tent owners and the other Oktoberfest powers that be. (Seriously, are y’all hiring or what?)

➤ Check out the Oktoberfest 2019 beer prices page for all the details and a breakdown of exact prices and where you will find them.

HOW ARE BEER PRICES AT OKTOBERFEST DETERMINED?

From what it sounds like, there’s a lot of complicated math involved (okay, just go ahead and toss my resume out—I will be absolutely no help to you). The beer prices at Oktoberfest are directly related to the overall rising costs of operating the festival and their efforts to make Oktoberfest more sustainable. So, as the cost to throw the world’s biggest party goes up, so must the beer prices. Look, it’s still a small price to pay for the experience of a lifetime, alright?

Oktoberfest officials have stated that there are actually five pieces to the beer pricing puzzle:

➤ For starters, the cost of physically constructing the festival has risen. So, if you didn’t already know, the entirety of Oktoberfest is constructed and destructed each and every year. All the beer tents, all the rides, all the… more beer tents are all built up and torn down annually. And good carpenters don’t come cheap. I mean, no one wants to party in a shoddy beer tent, right? Yikes.

➤ Each year Oktoberfest increases their sustainability practices. This trend towards acquiring higher quality, locally and sustainably-produced foods increases each year, as does the cost.

➤ In addition to better food, the festival has also moved toward more green energy than ever before. And, go figure, more environmentally friendly energy costs more.

➤Wage increases for the hard working, much deserving Oktoberfest staff also contribute to the rising beer costs. But, I think this is a factor we can all get behind. **Important note: never forget to tip your servers! They work their asses off and, technically, they’re the beer gatekeepers—let’s try to stay on their good sides, mmkay?

➤ And finally, the purchase price of getting the beer from the breweries has increased. And they straight up blame it on the costs of acquiring the raw materials needed to brew beer in the first place: hops and barley and whatnot.

So, you see, it all trickles down… little drops of price increases at a time until that moment when we’re standing on a bench making it rain euros and giving no craps how much our maß costs because we’re going to drink it anyway. 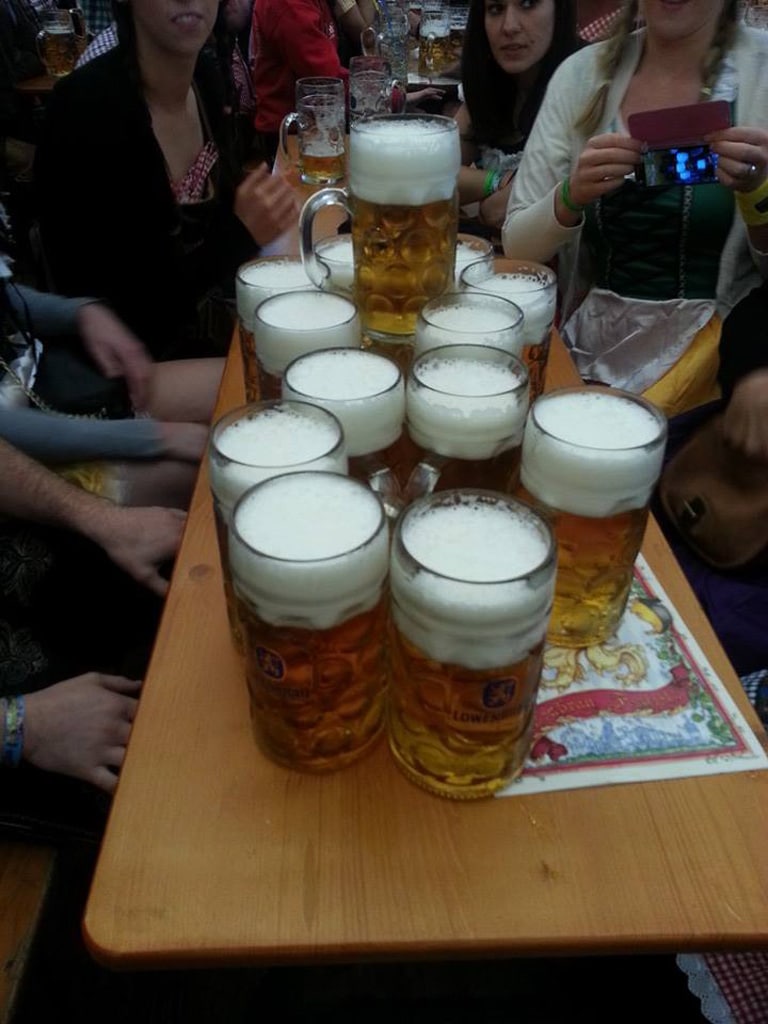 SO HOW MUCH WILL BEERS COST AT OKTOBERFEST 2019?

This cost is about a 3% increase from last year, or around 30 cents a litre. But don’t forget, it is just that—a litre of beer. That’s like three regular sized beers so actually this is A FREAKING STEAL. See, sometimes math is awesome.

Litres of water and soft drinks have also increased the tiniest bit but are still only slightly less than beer so… better just stick to the gold stuff. It’s all about financial responsibility, duh.

Need to remember this info?
Pin it on Pinterest! ↓↓↓ 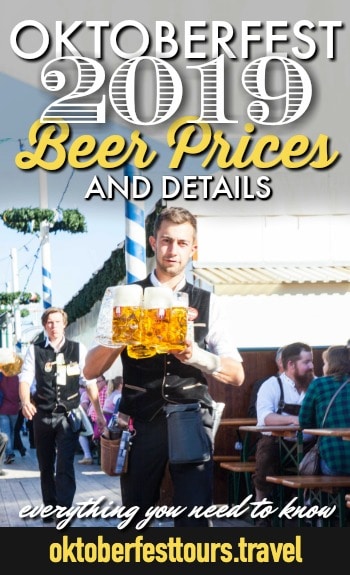