Oktoberfest 2020 will mark the world’s largest beer festival’s 210th anniversary — that’s a big one, right? Twenty-five is silver, 50 is gold, so 210 must be hops, barley, water, and yeast! Sounds like this is going to be one hell of a party you shouldn’t miss.

Oktoberfest 2020 is upon us and, no, it’s never too early to start planning. Actually, the earlier the better. What tents will you visit? Which parades will you see? How many bratwursts can you fit into your mouth at one time? Actually, we don’t wanna know that last one. To help you plan your trip, here is the Oktoberfest 2020 schedule of (really awesome) events:

9 a.m. | Oktoberfest begins! Pretty much! Beer isn’t being served yet but the tents are open and waiting for your butts to fill them up. Get ready to run, get ready to be shoved, get ready for survival of the thirstiest.

11 a.m. | The Oktoberfest opening day parade makes its way to the Theresienwiese from Josephspitalstraße, just west of the Marienplatz. Beer tent owners and landlords, and important people from the breweries (that you need to become friends with, like yesterday) arrive to the Oktoberfest grounds atop decked-out, horse-drawn beer carriages. There are about 1,000 participants in this festive parade who are lead through town by the Münchner Kindl–Munich’s monk mascot who is, for reasons unknown, a beautiful young woman. Well played, Germany.

10 a.m. | Another day, another parade! This time, the traditional costume parade. Much bigger than yesterday’s, this parade includes almost 10,000 participants, again led by the Münchner Kindl. The parade features traditional costumes and dancing, marching bands, flag bearers, and the best possible examples of German engineering—horse-drawn beer carriages. The route is slightly different than the previous–ending at the Theresienwiese but starting at the Max II monument on Maximilianstraße.

All day and night and probably a little into the next morning | Gay Sunday! Every year on the first Sunday of Oktoberfest you can get your Gagas over in the Pschorr-Bräurosl, the 8,400-seat tent known for their resident yodeler and, this is probably just a coincidence, their whip-snappers.

All day until 7 p.m. | The first of two Oktoberfest family days. All rides and performances are discounted today. Because what else are your kids going to do at Oktoberfest? (But I bet we know what you’re doing when the clock strikes 7:00, hmm?)

10 a.m. | Traditional religious Oktoberfest mass and memorial held (that’s mass, not maß). There’s also the opportunity to get baptized and first communion-ed because of course there is.

Sometime after siesta, I presume | Italian weekend! If you’re a resident of Italy, chances are you’ll be at Oktoberfest this weekend learning that stein hoisting cannot exist where flagrant hand gestures do. You can find this party over in the Löwenbräu tent.

11 a.m. | Annual outdoor concert – All the brass bands (plus drums and traditional alphorns) from all the Oktoberfest beer tents come together at the feet of the Bavaria statue for a massive concert. This is typically conducted by the Mayor and other local celebrities who have absolutely no idea how to conduct an alphorn. And a-one, and a-two, and a…

All day until 7 p.m. | Last Oktoberfest family day! All rides and performances are discounted because you didn’t learn your lesson the first time and you brought your kids back to the Wiesn. #its7oclocksomewhere

11:30 p.m. | Unofficial closing ceremony of Oktoberfest takes place in the Hacker-Pschorr tent. The lights dim, the sparklers are lit, and your worries that 10,000 drunken revelers are waving fire spears are few and far between. Join hands, sway, and sing your heart out – for it’s another 350-something days until Oktoberfest 2021.

The weekends are extremely busy, so get there early

It’s the end of the world ‘fest as we know it, and I feel fine DREADFUL.

So there you have it—the Oktoberfest 2020 schedule of (really awesome) events will be taking place before you know it and it’s never too early to start planning. Start with building up your biceps–you’re gonna need  ’em. 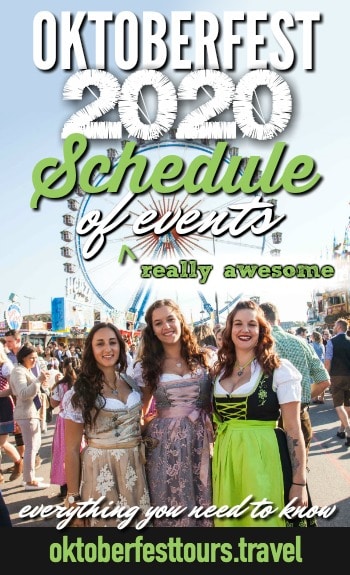