The Oktoberfest Is about More than Just Beer

In past years, the world renowned Bavarian beer festival that is known as Oktoberfest saw mainly locals as the ones who took to dressing in traditional German garb. In recent times though, organisers of Oktoberfest have witnessed the increasing phenomenon of world travellers and tourists joining in with this nostalgic spirit.

As more visitors come to the Theresienwiese each and every year, now numbering in the millions, they have increasingly taken on some of the characteristic outfits and practices that make Oktoberfest such an icon of German culture, indeed one that has now been exported to a great degree around the world.

Foreign tourists have now joined the waitresses of the Oktoberfest beer tents in donning the traditional ‘dirndl’, the historical dress worn by Bavarian peasant girls, or have eagerly taken to wearing lederhosen, which were once typically worn by men in the German country towns and villages. Revellers come from far and wide, from places such as the United States, South America and even the Middle East, to join in the celebratory atmosphere and experience the fraternal feelings that are a hallmark of Oktoberfest. 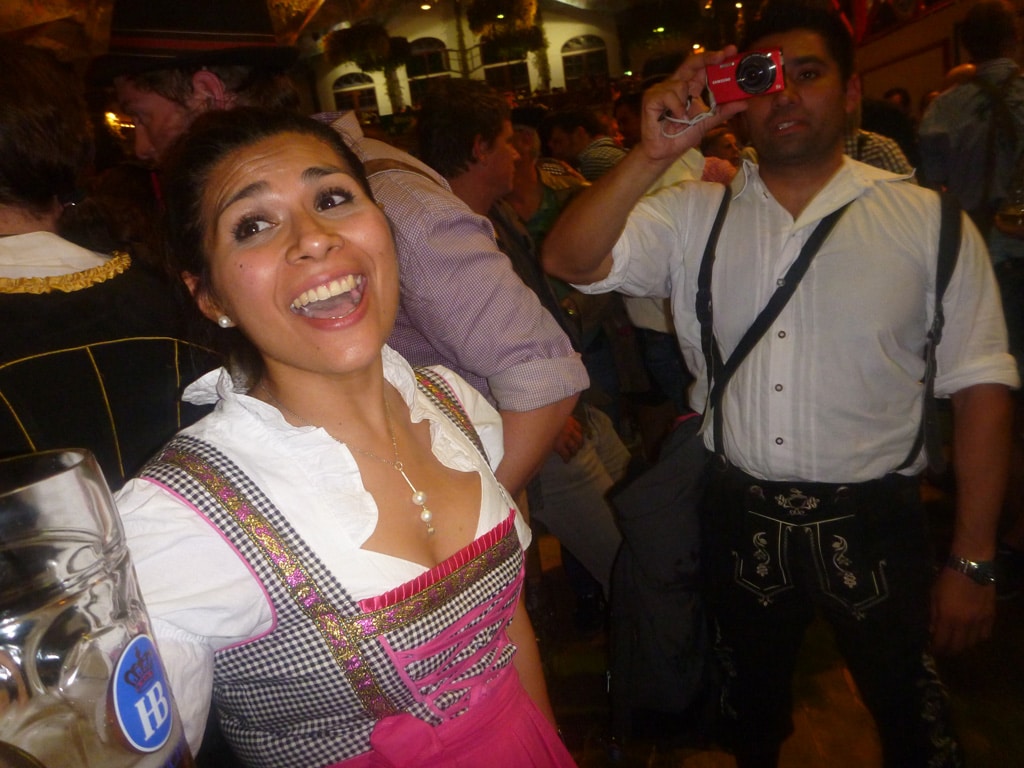 Visitors to the Oktoberfest are reportedly compelled to dress as the locals do – ‘when in Munich’, to paraphrase a well-worn idiom. Not wanting to stand out from the crowd or be instantly pegged as tourists is perhaps a motivating factor, as is the search for the truly authentic Bavarian Oktoberfest experience. Such a search is of course the holy grail when it comes to travel, being why most of us set off for personally unexplored lands – we want to experience something different, something out of the ordinary, and see how other people live and how other cultures manifest themselves.

Our Fascination with Oktoberfest Spreads across the Globe

The traditional Bavarian and German garb has become a modern fashion style in its own right – for some, ‘Trachten’ is the new chic. As the world becomes increasingly more interconnected and personal identities increasingly more subsumed into an amorphous, one world whole, tourists and travellers are, more than ever before, seeking out the traditional and the authentic. People are now more ready to look for uniquely local practices and traditions, with fashion styles being an offshoot of this desire for a holiday with a distinctly local flavour.

As the fascination with Oktoberfest has grown around the world, an ever increasing number of similar events can now be found cropping up everywhere. This is perhaps motivated by visitors to the one and only Bavarian Oktoberfest returning back to their home countries. Having experienced all the fun and enjoyment that Oktoberfest has to offer, people want to try, as best they can, to recreate that perhaps unique atmosphere in their own nation.

Look around the world from London to New York and closer to home in Australia, and you will find numerous ‘copy’ events that try to recapture some of the special magic that Oktoberfest has. This is a very difficult task however, as the original Bavarian Oktoberfest is so revered because of its unique melting pot of culture, atmosphere and a sense of fun that cannot be exactly replicated anywhere else. There is only one thing for it, and that is to experience the original Oktoberfest for you.