Home  /  Fun Stuff about Oktoberfest  /  Important Oktoberfest Decisions: The Parade of Tent Hosts or a Seat at the Tap?

Important Oktoberfest Decisions: The Parade of Tent Hosts or a Seat at the Tap?

During the first day of Oktoberfest there is the traditional Parade of Tent Hosts into Theresienwiese followed by the mayor tapping the first keg of beer. This is where you have to decide: either you can see the Parade of Tent Hosts with their brewery horses and remarkably decorated wagons, or you can grab a good seat in the beer tent or beer garden for the first keg. You can’t do both.

The Parade of Tent Hosts

If you choose to see the Parade of Tent Hosts and Breweries, it is without a doubt a good show and well worth a visit. A huge and varied assortment of horse-drawn carts makes their way through the cheering crowd to their tent, accompanied by brass and woodwind musicians.

It all starts just before 11am on Josephspitalstraβe near the Sendlinger Gate, then the parade makes a turn into Sonnenstraβe and then left onto Schwanthalerstraβe. From there, it continues to the Bavariaring and then straight onto Wirtsbudenstraβe and onto each brewery’s assigned spots.

History of the Parade

Since 1887, the march has been a staple part of the Oktoberfest tradition. The first parade happened a few years earlier, in 1879, when the Styrian Hansa (master butcher, proprietor of an inn on Tegernseer Landstraβe in Munich, and ‘Bavarian Hercules’) drove to Theresienwiese with many guests, two coaches and lots of fuss. However, he was stopped by guards and forced to pay an exorbitant fine of 150 Deutsch Marks – but that didn’t stop him from getting a permit for it during next year’s Oktoberfest, and with that, started a lovely tradition.

Today the parade is led by the Müncher Kindl (Munich child – the figure on the official crest of the Bavarian state capital) followed by the current Mayor of Munich. If you want to cheer on the hosts and their attendants, you should find yourself a good spot in the crowd, preferably not behind two seven-foot tall Bavarian giants. It’s best to stand near the beer tent that you plan on visiting later, that way you can mix fun with practicality.

If you decide against the parade and would rather get a seat near the tap, you should wake up early, since the seats are very much desired, and you should know which tent the event happens. If you want to see the mayor tap the first keg, you have to go to the Schottenhamel tent. Unfortunately it’s very hard to find a seat in here, since so many people want to see how many strikes with a big hammer it takes the master of ceremonies to tap the 200 litre beer keg (which has a lifespan of about 11 minutes at Oktoberfest!) 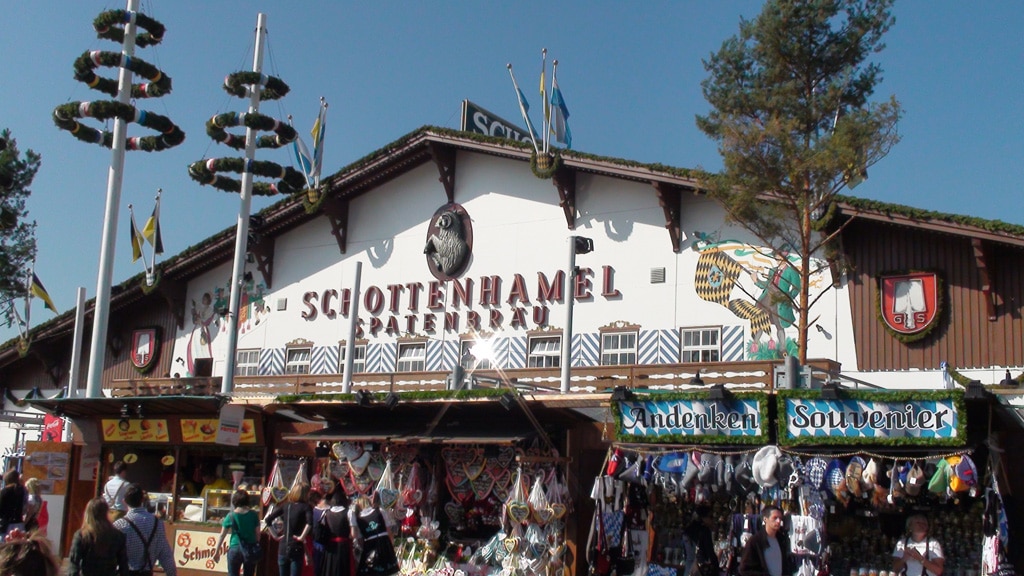