From a local agricultural event to a famous festival, the Stuttgart Beer Festival (locally known as Cannstatter Volksfest) has become an event that millions of people travel to each and every year. Colorful flashing lights, the smell of burned almonds, the rattling and squealing of various machines, the famous roasted chicken known as Göckele, the band-master yelling ‘die Krüge hoch’ (raise your mugs) – it must be Wasen time, a reference to the festival grounds on which it is held.

The Stuttgart Beer Festival is the second biggest in the world after Oktoberfest, and has been going since 1818. It is held in the city of Stuttgart in the German state of Baden-Württemberg. 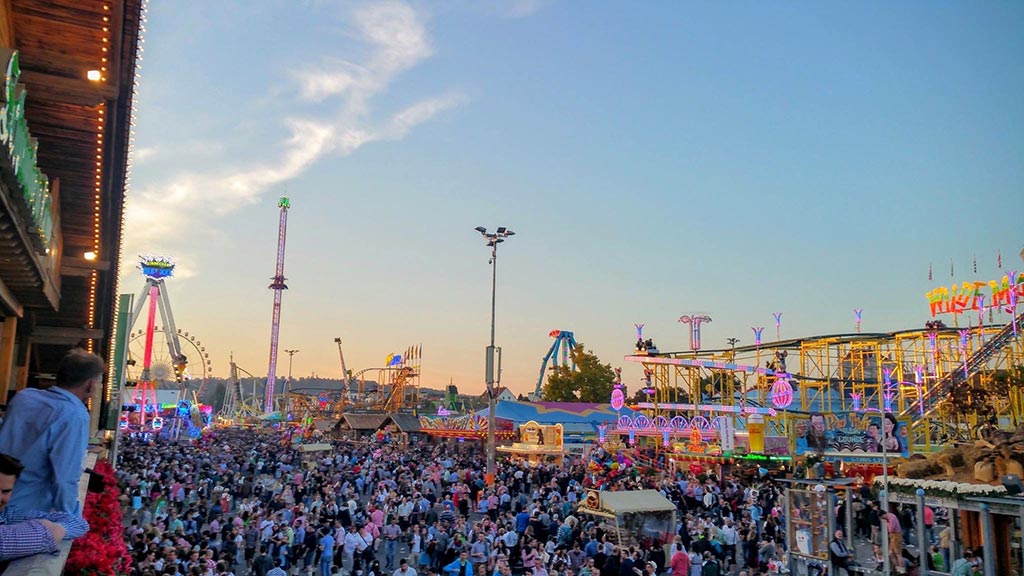 The Strange Origin of the Festival

In 1815 the huge eruption in Indonesia of the volcano Tambora resulted in a climatic catastrophe as far away as Europe. The shocking explosion threw about 100 cubic km of rocks, dust and ashes up to 70 km high, and the sky went dark. The shockwave was felt more than 1500 km away: 10,000 people lost their lives, with another 10,000 dying during or following the aftermath. The jet stream carried the dust particles around the world, causing crop failure and famine in Europe.

In the German state of Württemberg they had the coldest 1815/16 winter since records began – snow until the month of May, no summer at all, alternating rain, thunderstorms and hail continued right into the growth season. So, there was no harvest to bring in during those years. People were starving throughout Germany; what little flour was left was stretched with sawdust and the potatoes that had been planted were dug up again. The people’s needs were dire.

In 1816, when Wilhelm 1 became King of Württemberg, there was a terrible crisis: Czar Nikolaus of Russia, his brother-in-law, helped by relieving some of the country’s misery with deliveries of grain. And when the first harvest wagon arrived in 1817, King Wilhelm and his wife Katharina had the great idea of sponsoring a harvest festival. The festival was to take place on an annual basis on September 28th, the King’s birthday, on the Wasen. 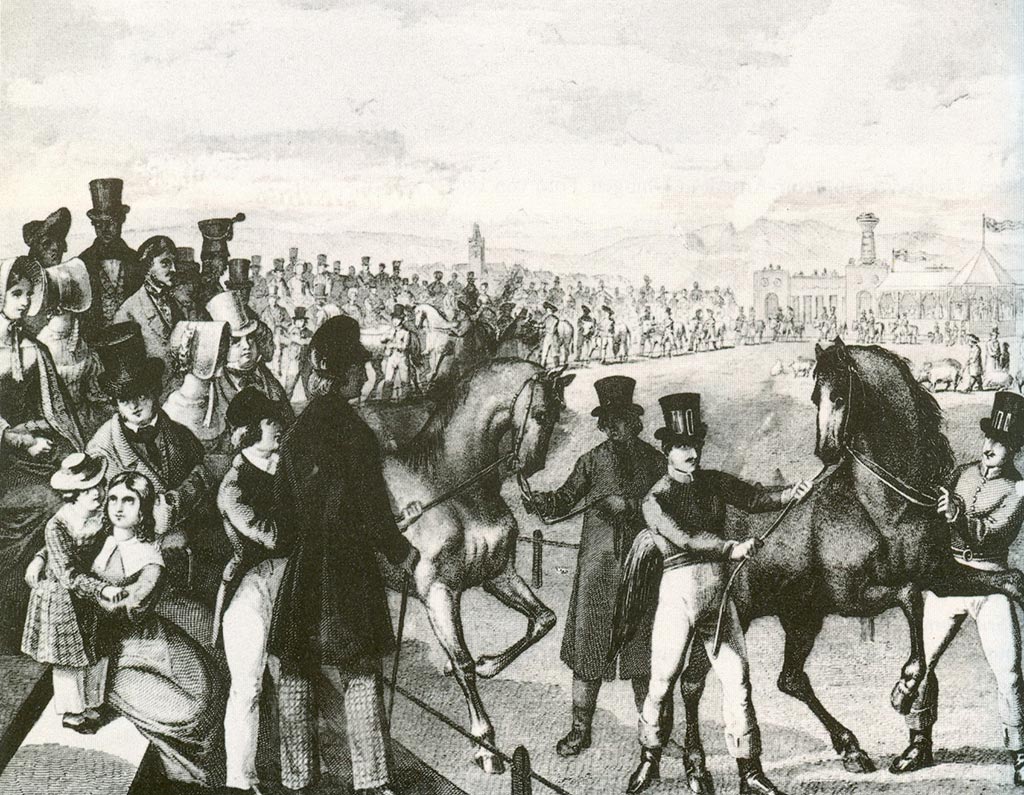 The Stuttgart Beer Festival began as an agricultural show

The inaugural festival had more than 30,000 visitors: it was held in 1818 and lasted for one day. The population of Canstatt at that time was just 3,000! Honorary awards and cash prizes were donated by the royal couple for outstanding agricultural achievements. This was a festival designed to encourage farmers to achieve productivity.

At the same time, the royal couple designed and built an agricultural school in Hohenheim Palace: this was the foundation for what is today’s agricultural university. Because of these achievements and other outstanding efforts, the young King was named ‘Farmer among Kings’ and ‘King of the Farmers’. To this day you can still see many of these achievements in the German Agricultural Museum – things like the double-bladed plow.

From Agriculture to People

In the beginning, the major activities of the festival revolved around awards for breeding performance and displays of agricultural efficiency by the farmers of Württemberg. The first carnies and food shops arrived with the first festival: vendors attracted customers with lots of sweet, fancy foods and sauerkraut sausage. Other culinary choices were completed with a market.

The carnies showed off the fattest woman, the strongest man, and many other curiosities; and over the coming years the festival grew bigger and bigger, finally changing from the Agricultural Festival of Kannstadt to the Cannstatter Volksfest.

In the 19th century the festival lasted one day; it was extended to five days by 1920, and today it lasts for 16 days. 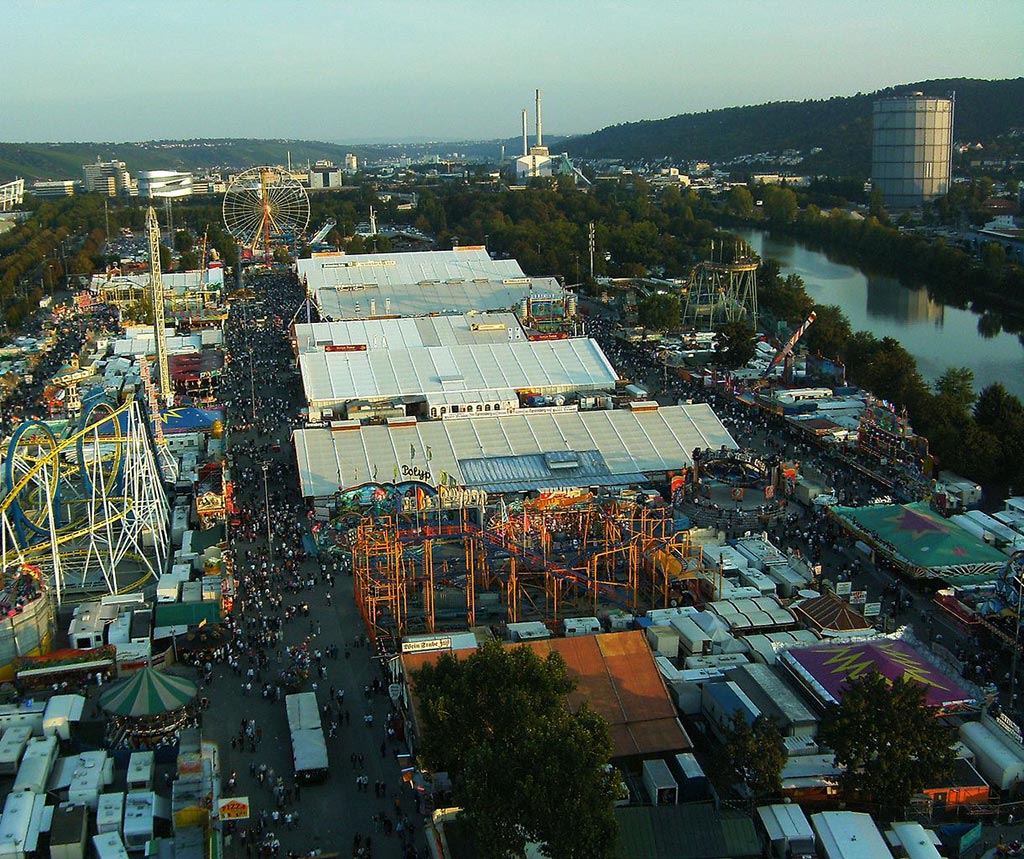 It started off with some beer counters and a few Volksfest carnies; they were subsequently moved to the fringe of the festival to allow for a dignitaries stand and royal lounge. The layout of the festival in 1860 was three main streets with a few side streets handling the increasing crowds, but today the Stuttgart Beer Festival has approximately 350 companies and is the largest festival-carnival worldwide. Every year between 4 and 5 million travel from around the globe to attend this event, just a million shy of its Munich equivalent.

The Emblem of the Festival

The royal builder, Nikolaus Thouret, was assigned by King Wilhelm to design an emblem in the middle of the festival area, next to the royal lounge. He created a fruit pillar, symbolizing thanksgiving, and this is still the Volksfest emblem today. Sitting on top of the 23 meter-high pillar sits a bowl filled with fruits. The only thing that towers above it is the mobile Ferris Wheel.

One of the most popular events of the Canstatter Volksfest is the parade; held on the first Sunday of the festival. Almost one-hundred historical groups of Shepard-dancing groups, town militia, wagons showing off different crafts, groups of musicians, groups dressed in traditional outfits, and more, form this colorful ‘Lindworm’. Other professional period groups and people in traditional clothing have been taking part in this festival since 1841.

Want to raise a beer at this amazing festival? Join us in the beer tents! 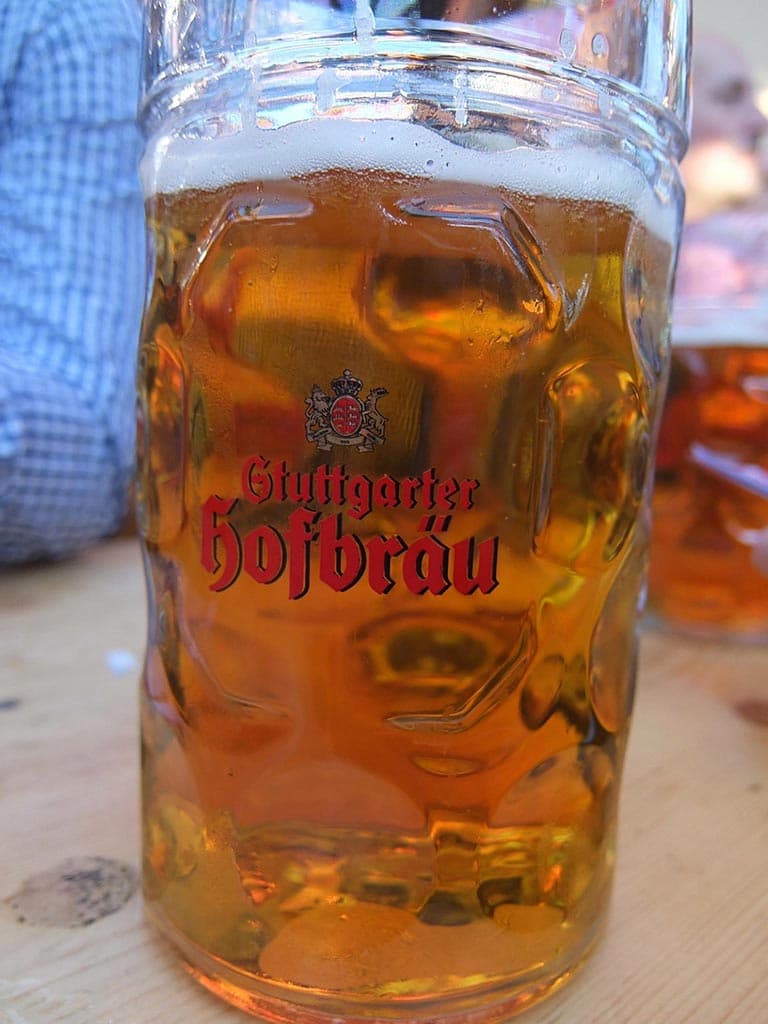 Just like at Oktoberfest, the beers come in 1 Litre glasses. No place for the weak!

Check out some of the other beer trips in Germany and Europe.