Remember when you were just a wee thing, staring up at the gates to Disney World or [insert favourite theme park here] with an overwhelming sense of amazement? When you literally thought your body would explode if you had to wait even one more second to experience the magic you knew was inside? You know there’s a place like that for adults, right?

It’s easy for the children to get excited; everything is magical to them: the way the remote control works, how the garbage truck picks up the trash cans, magnets, peek-a-boo for crying out loud! (Actually, I think we can all agree, magnets are pretty freakin’ mind-blowing.) But as adults, our sense of imagination and awe is dulled substantially by tedious job duties and the bozos that assign them, rush-hour traffic, and something called a ‘mortgage’ that I keep hearing about. To deal with it, some turn to meditation, others to medication, and still others become dedicated beer drinkers. And for us, imbibers of the brew, there’s a whimsical escape on the same scale as Disney World but with fewer strollers and a lot more cleavage.

I’m talking about Oktoberfest… but you already knew that because you read the title.

The children have their little mermaids and their sleeping beauties but we have our own unique brand of beautiful princesses. Only ours come toting half chickens and beers by the litre. The kids dream of one day riding in an enchanted horse-drawn carriage alongside their fairy godmothers and a handsome prince. We dream of riding shotgun on the Paulaner carriage next to an old man with a whip and a killer handlebar moustache, delivering kegs of beer to the thirsty masses. Oh, how the commoners would adore us!

Oktoberfest, too, has its fair share of celebratory parades and upbeat, brass-heavy music. There are rides and games and amusement all the same as well as its own special cast of characters. There’s the guy who tries to chug his litre in front of a crowd of thousands but fails miserably, inviting a deluge of uneaten food scraps. There’s the first-timer asleep in the grass, the girl wearing the comically large lebkuchenherzen, and me in the corner doing the chicken dance as if my life depended on it. Combine these and you’ve got an award-winning animated summer blockbuster on your hands. Moral of the story: Don’t let the kids have all the damn fun!

That innocent sense of excitement you experienced the first time you laid eyes on a towering castle, the sweet taste of tempting fate on your first roller coaster, the feeling of being surrounded by true magic and fantasy, it doesn’t have to end when you hit puberty. In fact, just as hair begins to grow in new and unusual places so should your enthusiasm for embracing your desire to make believe. Germany even has castles, you guys. Real ones. Real big ones!

Much like the famed mouse house, visitors arrive at Oktoberfest from all over the world. They dance, they giggle, they throw budgets out the window. They once again experience childlike wonder and, at the same time, consume seven million litres of damn good German beer. Oktoberfest: the tap-piest place on Earth. 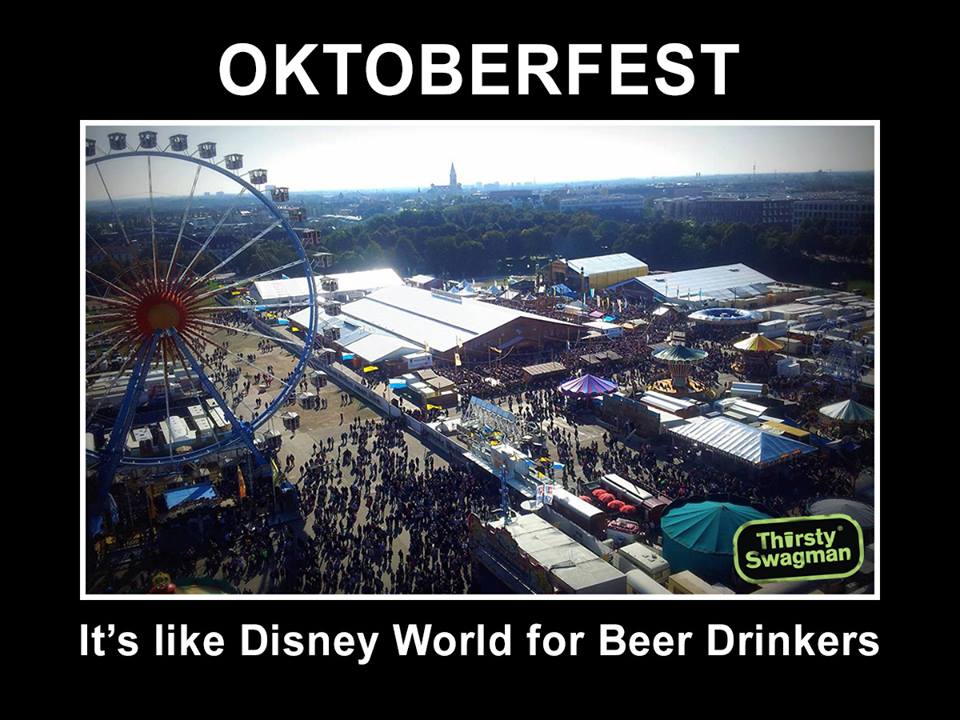 We sure hope to see you at Oktoberfest real soon. Why? Because we like you! So get practicing that Fliegerlied! Man, that’s a weird video…