It’s beginning to look a lot like we have a long way to go before Oktoberfest, like a lopsided wooden keg, rolls back around again. Waiting is hard but luckily for us Germany fills some of these hopeless months with centuries long traditions, twinkling lights, and most importantly, mulled wine (!!!). Or as I like to refer to this period: Decemberfest! ⇠ Anything to help me cope, right?

Germany’s Christmas markets are world famous attracting millions upon millions of visitors each year the same way our trusty beer festival does (but with less cleavage). They take place during the four weeks leading up to Christmas and all over the country, each market offering its own unique atmosphere and specialty items. Not unlike the beer tents, just saying…

Also known as Christkindlmarkt, Germany’s Christmas markets date back to the late Middle Ages and haven’t changed too much since they began. They consist of any number of open-air stalls offering handcrafted seasonal items such as ornaments, decorations, and toys; traditional food and drinks; and often musical entertainment. They act as festive meeting spots for locals and markets for those who appreciate handmade gifts over the crap they sell at the mall that you return the next day.

WHAT TO SHOP FOR

Handmade gifts and crafts are all well and good but I know what we all want and that is booze and food. Germany’s Christmas markets are famous for their glühwein, a type of hot mulled wine, and eierpunsch, their probably-much-better take on egg-nog.

For noshing make sure to check out the gebrannte mandeln (the candied, toasted almonds we all know and love), lebkuchen and magenbrot (two kinds of traditional gingerbread cookies), and of course, bratwurst. No German festival would be complete without meat!

The Nuremberg Christkindlmarket is arguably the most famous in Germany. It dates back to 1628, is held in the city’s largest square, and consists of more than 180 market stalls. The surrounding Alps and nearby medieval castle atop Old Town Hill provide a stunning atmosphere for your Oktoberfest offseason.

As previously mentioned, handcrafted products are highly respected and nowhere more than Nuremberg. Modern and mass produced items are strictly prohibited and the stalls are scrutiny to what I’ll go ahead and call the Crap Police who patrol the markets making sure nothing unauthentic slips through. Like a mall Santa—nobody wants that.

While not the largest or swankiest, the Rothenburg ob der Tauber Christmas market is by far the sexiest. Set in this fairytale medieval town, you can’t beat the cosy atmosphere and fantasy factor. While there, try their signature Schneeballs (snowballs) consisting of strips of fried dough covered in powdered sugar and chocolate and visit Germany’s one and only Christmas museum.

Cologne’s “Am Dom” Christmas market sets up just outside the larger-than-life Cologne Cathedral and offers visitors around 160 stalls and a famously large Christmas tree. The atmosphere bursts with mulled wine, traditional holiday music, and, after the two have combined, some really jolly fellows and a sleigh full of embarrassing dance moves.

There’s even a Rudolfplatz for kids, transporting them into the fairytale world of the Brothers Grimm and out of your hair for a bit. Bring on the glühwein! This elf wants to boogie!

The Dresden market is traditionally known as Striezelmarkt and is the oldest in Germany dating back to 1434. This market’s highlight is the annual Stollen Festival during which a massive Stollen cake is processed through the town then cut and distributed. We need more festivals like this one—who do I need to talk to about this?

The Dresden Christmas market showcases traditional glass blowers, bakers, and woodcarvers on site and boasts the world’s tallest nutcracker. Sorry, I forgot to mention this one was unequivocally frightening! I’ll skip past the part about the puppet theatre…

So while Oktoberfest 2017 is slightly less than a year away, there’s still plenty to occupy your time (and your liver). You can make it, I promise. You’re a strong, patient woman. Sorry, that was just me talking into the mirror. But really though… 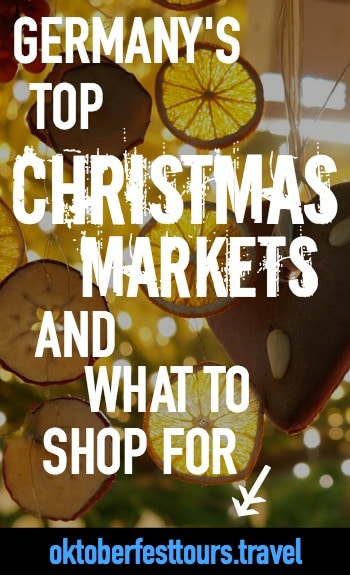