German New Year’s Traditions Are Better Than Yours

Many countries around the world have similar traditions and peculiar ways of ringing in the new year. They probably incorporate in some way fireworks, bubbly booze, locking lips with strangers at midnight (I see you’re making great decisions already), and making profound sweeping declarations for the year ahead that you’ll break within the week or forget that you made at all because… alcohol.

What your New Year’s traditions probably don’t include though is fortune telling, mustard donuts, a pope, or playing with a highly toxic heavy metal… for fun. Enter: Germany. Because, who else?

For starters, New Year’s Eve in Germany is known as Sylvester after Pope Sylvester, an early 4th century pope whose resume includes curing leprosy, baptizing Constantine the Great, and possessing excellent word processing skills. Actually, scratch that last one. He died on December 31st, 335 AD forever cementing in time his feast day on the booziest and most obnoxiously sequined of all days on the calendar.

Though most traditions and customs revolve around this specific event, some, like using fireworks as a way to scare the pants off evil spirits (and your neighbour’s dog) with loud noises and bright flashes, date back to the much older Pagan celebration of Rauhnächte.

Sylvester incorporates many, quite superstitious traditions. One being that you must make sure to not have any laundry hanging on the clotheslines. This prevents Odin (sometimes known as Wotan), the chief god of North Germanic lore, from getting stuck while creeping around your house at night. It’s said that when you leave clothing on the line, someone in your family will die in the new year. I wonder how long until the rest of the world adopts this casual threat? “If you keep making that face, it’ll get stuck that way someone in your family will die this year!

The tradition of Bleigießen (literally “lead pouring”) is also very popular and, I’m sure, a flawlessly accurate way to predict your own future. Small pieces of lead, which I assume are just lying around the house, are melted in a spoon over a candle. They’re then dropped into a bucket of cold water where they solidify immediately. Whatever the shape, such is your future. For instance, does your hardened mass of lead resemble a flower? A new friendship is in store. A bell? An inheritance is coming your way (forgot to take down the laundry, eh?). Or my favourite—a bottle? Many happy times to come in the new year! Even the fortune-telling lead balls know the fastest way to a good time.

The most inexplicable ten minutes of the night however belong to the popular German tradition of watching the 1963 British sketch comedy Dinner for One—even though no one can tell you why. My guess? The drunken butler.

Sylvester dinners take place all over the country and incorporate a variety of traditional foods. But whatever you choose to eat for dinner on New Year’s Eve, make sure to leave a little to eat just after midnight—another tradition ensuring a bountiful new year and a slightly less harsh hangover.

Some popular Sylvester dishes include:

Lentil soup – The lentils represent pennies and thus by eating on the eve of a new year you’re ensuring pocketfuls of cash in your near future. I’ll have six servings, thankyouverymuch.

Jelly donuts – but be careful eating these as oftentimes a random jelly donut is filled with mustard as a common New Year’s prank.

Raclette – because, apparently, sharing cheese is a precursor to good luck and I COULDN’T AGREE MORE. Gimme your cheese. All of it. It’s for your own good; I promise.

Carp – As much as eating carp for Sylvester dinner is a tradition, so is the keeping of one of the fish’s scales in your wallet to ensure it’s full and fat all year long.

Whatever you decide to eat as part of your German New Year’s traditions, stay away from poultry. It’s said in Germany that your good luck and happiness for the coming year will fly away with the bird’s feathers. It obviously wasn’t great luck for the bird so…

In Germany on New Year’s Eve, be prepared to hear a lot of guten rutsh! instead of something else more closely resembling their wish for you to have a happy new year. Guten rutsch literally means “good slide” and your German friends are simply wishing you a good slide into the new year. It’s like they know how bad I am on icy sidewalks.

Happy sliding everyone! Best of luck in 2021.

But first, make enjoying this fine film the last thing you do in 2020.

Is visiting Germany one of your totally reasonable New Year’s resolutions? Fill one of the remaining spots on our Oktoberfest, Stuttgart, or Beer or Bust tours! 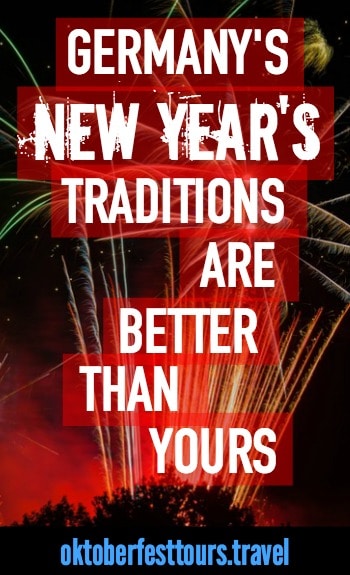