What NOT to do at Oktoberfest

So you’re making plans to go to the biggest beer drinking festival on the planet? You really don’t want to put in all that effort (and money) to have a bad time and Oktoberfest can be a little daunting for the first-timers. So to help you out, here’s a short list of what NOT to do at Oktoberfest.

WHAT NOT TO DO AT OKTOBERFEST

1. Don’t wait until the last minute to book accommodations.

I used Airbnb to find a decently priced apartment next to the fairgrounds months before Oktoberfest kicked off, but it took a lot of trial and error. A few people cancelled on me because they accidentally set their prices too low. Hotels were crazy expensive and hostels were full.

I lucked out in the end, but if you don’t find a place to stay with months to spare, you’ll have a hard time finding anything. My host told me that some people rent out their apartments for the whole of Oktoberfest and in doing so make enough to live rent-free for the rest of the year!

2. Don’t buy your dirndl or lederhosen at a costume shop.

Yeah, those “dirndls” that girls wear for Halloween? Not really dirndls. The traditional dress should never be above the knee–they’re sexy enough without that little detail anyway. The same goes for lederhosen — the pants should always cover your knees when you’re sitting down. Otherwise, everyone will know you’re a tourist. Believe me.

It’s worth your money to splurge a little for the proper traditional dress, although you don’t necessarily have to spend a million dollars for something good. Just shop ahead of time or in German cities outside Munich. A well-made dirndl or lederhosen get-up will last you forever, too. And we all know your first time at Oktoberfest won’t be your last.  Here’s what you need to wear when you visit Oktoberfest.

It’s pretty clear that Germans know how to handle their booze and being a drunken, falling down mess at Oktoberfest never goes over well. Sure, everyone is out to have fun, but there’s no need to slam five litres of beer in one hour, right?

Take your time. Enjoy your day. Get to know the people sitting at your table. Don’t be that person at 5PM who’s too drunk to function and/or passed out in a corner somewhere. You will be ridiculed. (Plus you’ll miss all the late night fun!)

Have you seen what those gals carry?! I’ll never comprehend how one woman can carry eight litres of beer in just two hands. The skin between my thumb and forefinger was literally bruised from lifting just one litre at a time all day — never mind eight!

The Oktoberfest servers work super hard. They’re on their feet all day. They’re attentive, and you’re never long without a beer. The standard is usually about 1EUR per beer, but be as generous as you like! 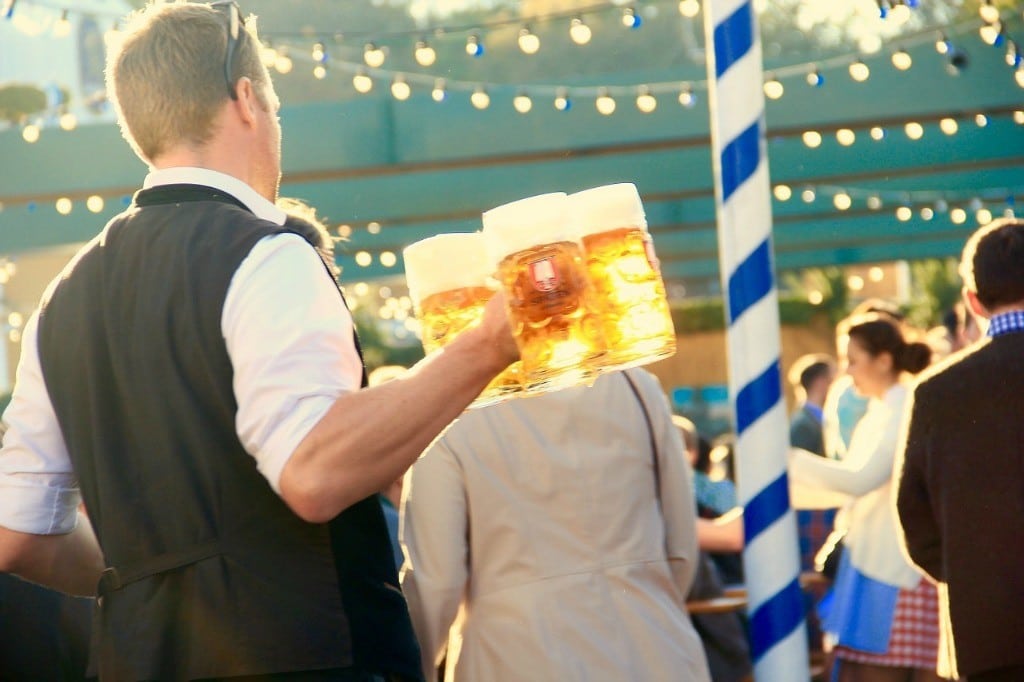 5. Don’t hop on a carnival ride after a few litres of beer.

Everyone’s a little bolder at the end of the evening, and hopping on that ultra high-speed carnival ride might seem like a good idea — but there’s a reason why some rides have a designated “splash” zone. Just don’t.

Although, if you get a chance, be sure to stop and watch the Toboggan ride in action after 10PM. I won’t divulge any more details, but I promise you’ll laugh harder than you have in your entire life. Good ‘ol German schadenfreude!

6. Don’t show up late in the afternoon.

This is especially true on the weekends but seriously, do NOT show up on the Theresienwiese in the afternoon and expect to easily find a table. It ain’t happening. People show up before the tents even officially start selling beer, just to grab seats. If you go this route, grab some playing cards or something to keep you occupied.

But, to be fair, half the fun is scouting out empty seats at tables with strangers. About 10 people can fit per table, so make some friends and soon enough you’ll all be dancing on your seats and singing along to “Ein Prosit!” at the top of your lungs.

7. Don’t not leave the beer tents ever.

The beer tents are ridiculously fun and each one has its own unique personality, but there’s SO much going on beyond the tents as well. Even if you’re not interested in checking out the rides, the fairgrounds are really fun to just explore. You’ll see all sorts of spectacle.

Plus the food options on the Theresienwiese are pretty amazing — you can get everything from ox tails to half chickens and it’s all delicious.

My favourite stops? The beer carousel (there’s a bar, and it rotates!) and the ferris wheel. I’m afraid of heights but bravery is a pretty great side effect of having a few litres of beer.

8. Don’t plan everything in great detail.

Having said all that, some of my best moments at Oktoberfest were simply the result of just going with the flow and enjoying the chaos! I made new friends, had a ridiculous amount of fun, and yeah, got drunk as hell. Prost! 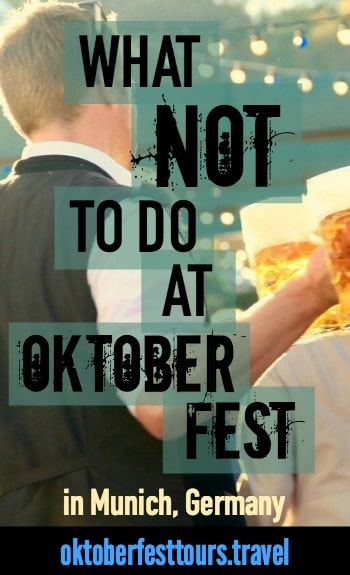