Maybe you just can’t handle two, three, four straight days of Oktoberfest-ing. It’s fine; no one is judging you. Well, okay, maybe they are a little; but don’t let that stop you from doing you! There are plennnnty of other things to do in Munich that don’t involve stein hoisting or wiener schnitzel-ing or Fliegerlied-ing. You’ve got history, fine art, pretty boy princes, fast cars, great views, a Chinese pagoda, some top-notch surfing… wait, where are we? Welcome to munich, meine freunde.

THINGS TO DO IN MUNICH

Because this is Munich, Germany after all, an undisputed beer capital, we can’t fully omit the brew from our plans. I’m not sure what would happen but I think it’s safe to say it would involve the earth opening up to swallow us whole and the end of humanity as we know it. But that’s just a guess. So let’s ease into this life outside the Theresienwiese.

I know, I know; it’s a beer hall. But if you’re going to leave the Wiesn after a couple days at Oktoberfest, you’ll need to slowly adjust to the outside world. And the Hofbräuhaus is just the place to do that. Munich’s Hofbräuhaus has been around since 1589 so it’s about time you got yourself there. It’s the epitome of Bavarian tavern culture and gemutlichkeit at its very best. Hofbräu is one of Munich’s big six breweries and the ‘haus is ground zero for some of the best beer and Bavarian cuisine you’ll ever have.

Munich’s English Garden is one of the world’s largest urban parks and is located smack dab in the middle of Munich. It’s called the “English Garden” because of something to do with its landscaping style, but when you see the acres of nude sunbathers you’ll know you’re for sure in Germany. In the park you can enjoy lunch (and a litre of beer, go figure!) in the beer garden at the Chinese tower and watch the brave (insane?) surfers on the Eisbach River. You read all of that correctly. 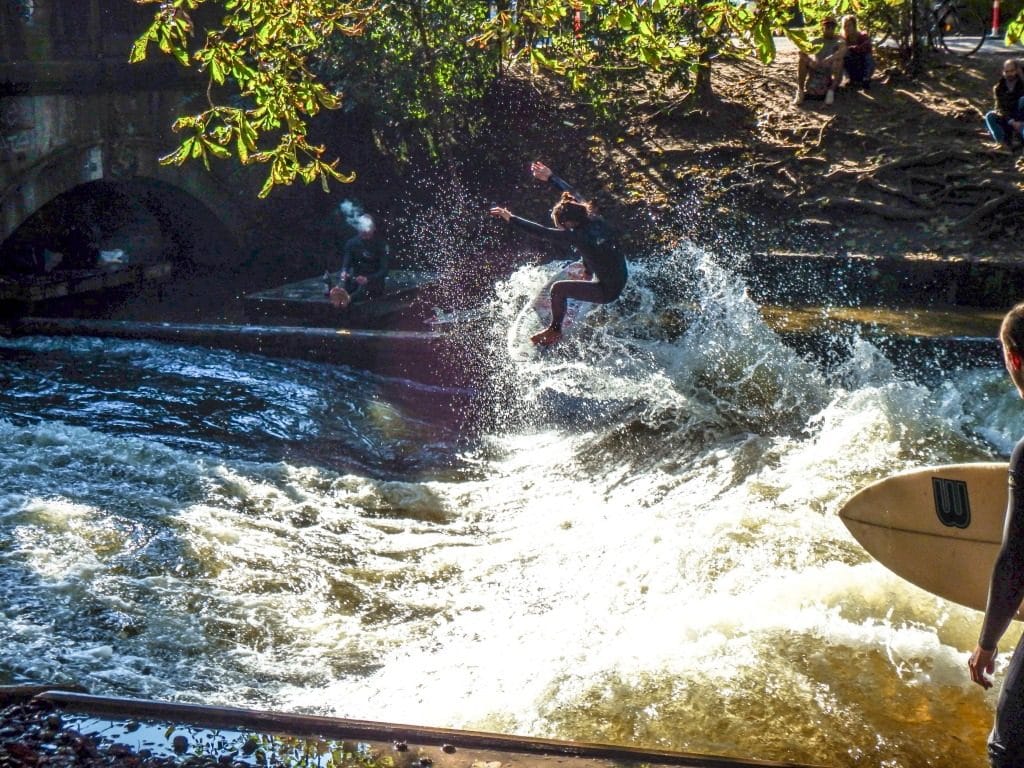 Every day at 11:00 and 17:00 (that’s German for 5:00 pm), the glockenspiel in Munich’s town centre chimes and puts on a show—for about 15 minutes. It re-enacts two stories from the 16th century—one being the marriage of Duke Wilhelm V and Renata of Lorraine (there’s even a joust), and the other being the dance of the coopers, the guys who danced through the city during times of plague to help bring life and hope to those suffering. But wait, should I back up? The Munich Rathaus is the tall structure with the clock on top you’ve seen a hundred times, and the glockenspiel is the green part half way up where all that medieval action takes place.

CHECK OUT THE VIEW FROM ST. PETER’S CHURCH

Across from the glockenspiel you’ll find the church of St. Peter. At the top of that church you’ll find a tower that you can climb for about €3 and some of the best views in town. From the top you can see all of downtown Munich and off into the Alps. The views are panoramic, the crowds are hefty, and the steps number 299. You can do eeet!

A short ride on the S-Bahn will get you to Nymphenburg Palace, a Baroque palace that was used as the summer residence of the Bavarian rulers. The summer house. Just let that sink in for a second. Here you’ll find the main palace, a carriage museum, massive lakes and fountains, fancy cottages in the woods including a chapel covered in seashells, and an awesome hall of mirrors. Nymphenburg Palace is where King Ludwig of Neuschwanstein Castle fame was born and where your dreams of “summering” go to die. 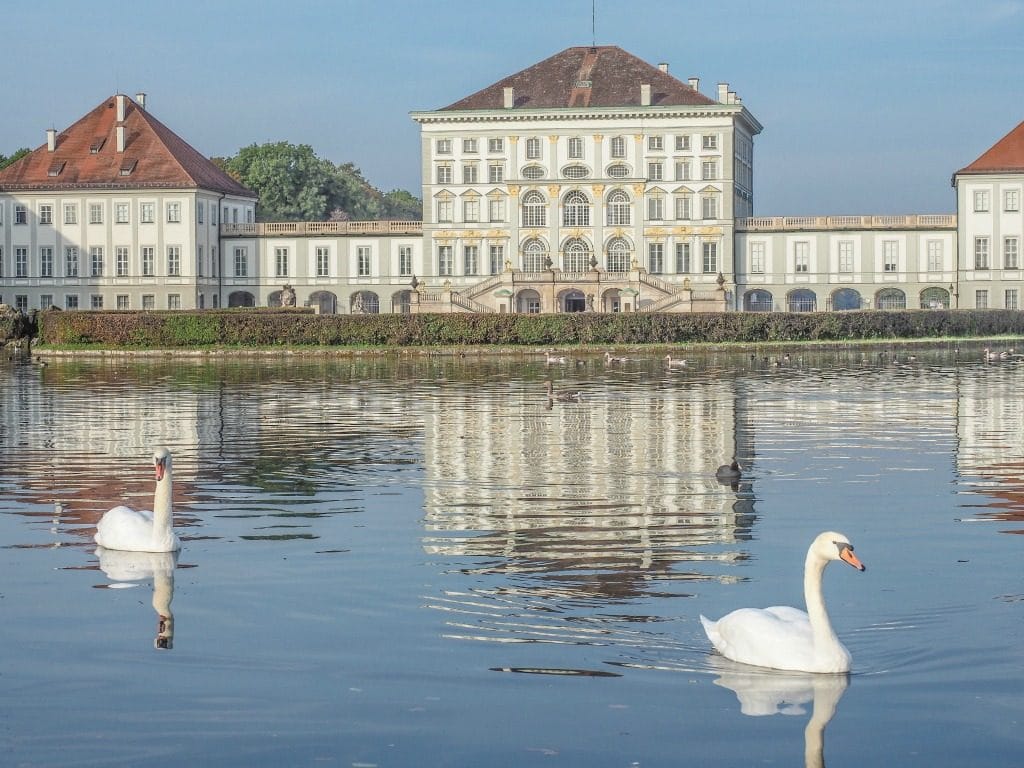 And since we’re in museum-mode, let’s head over to the BMW Museum and let’s do so in a really, really fast car if at all possible. It’s located just outside the BMW headquarters so they probably won’t even notice if one or two go missing, right? Here you can learn (learning, I know; just bear with me) about BMW, Mini, Rolls-Royce (and more) through exhibits and tours and… there’s probably no beer here.

Missing the outdoors of the Theresienwiese beer gardens already? Maybe a stroll through Olympia Park is in order. The park was constructed for the 1972 Olympics and today is comprised of an arena, the Olympic village, shopping, and, well, a park. There’s a beautiful lake, plenty of green space, and for whatever reason, a ton of bunnies. Actually, I think we do know why there are so many rabbits, wink wink. You can also head into the Olympic Tower to see the views from the observation platform, enjoy a meal at the revolving restaurant, and check out the rock and roll museum inside.

These seven are just a few of the many things to do in Munich beyond the Theresienwiese if you care to venture outside the beer tents. If not, that’s cool too. Interested in a little of both? Book one of our Oktoberfest tours and enjoy the best of Munich, Germany! 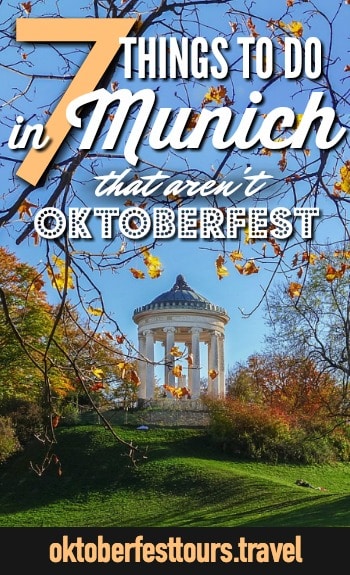