Well, the first thing you should know about the current beer carrying record = you’ll never get close enough to touch it. I mean, after years of Oktoberfest-ing, I’m just now (barely) able to drink my litre with the use of a single hand. *pauses for applause* What is it we’re missing? Bavarian genes? King Kong-level testosterone output? The ability to resist naps in favour of accomplishing our goals? Whatever it is, Oliver Strümpfel has it.

Well, only the most important of all the events in the Winter Waiter Olympics, that’s what.

Maybe you’ve heard of “steinholding”, aka Masskrugstemmen, – the Bavarian strength competition where competitors hold a full beer stein out in front of their bodies, parallel to the ground? Well this is not that, but it’s close.

Taking Masskrugstemmen a bit further, because testosterone, stein carrying (Masskrugtragen, which essentially means “masskrug carrying”) involves piling up as many full beer steins as one can and carrying them a predetermined distance. Like when you and your entire graduating class order a round and your server prefers to make only one trip. Lazy bloke.

I previously reported on the latest stein carrying record breaking by Matthias Volkl, a 26-year-old employee of Munich’s Hofbrauhaus who carried 27 steins on September 12th, 2016. To give you some perspective, that’s 137 pounds carried 131 feet with just two hands and two Popeye-shaped arms.

In keeping with my two-hands-per-litre norm, I would need 50 hands and arms to perform the same feat. I’d also have one hell of a time finding a dirndl blouse that fits. But… #worthit. 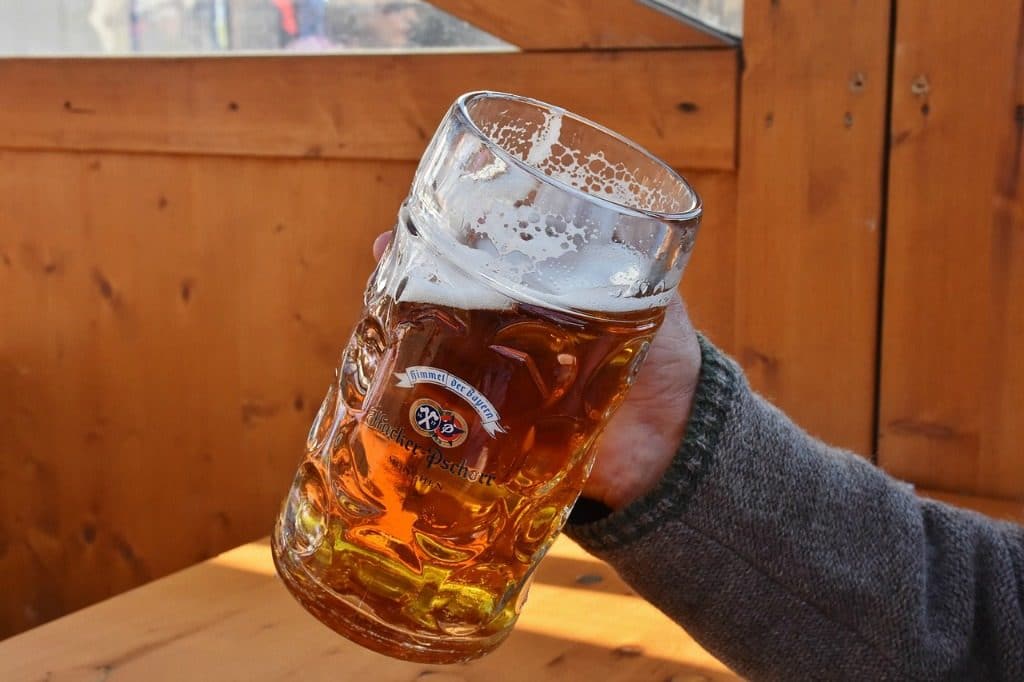 One year after Volkl broke the world record for stein carrying, current record holder Oliver Strümpfel showed up to kick Mass and take names. Strümpfel is a 45-year-old Bavarian tax inspector who broke the record at the Gillamoos Fair in Abensberg, Germany. The new beer carrying record: 29.

Strümpfel started the run with 31 full steins but lost two, leaving him with 29 full steins—still enough to break the world record and probably a phalange or two.

Oliver Strümpfel is not only the current stein carrying world record holder, he’s also a previous holder of the title. In 2016 when Matthias Volkl broke the record with 27 steins, it was Strümpfel’s record of 25 that he broke. There was a wee bit o’ controversy that year as Strümpfel believed Volkl’s performance was bogus and vowed to beat him again, once and for all—the way all cartoon villains do. Mwah-ha-ha!

05 | SO WHAT ARE THE OFFICIAL STEIN CARRYING RULES?

The full beer steins must be pick up, carried over a distance of 40m (that’s German for 131 feet), and sat down on a table to count for the record. However many full steins make it back down on the table are counted. They can’t have fallen before the line and they can’t have lost more than 10% of their beer.

In the case of the latest beer carrying record breaking, Strümpfel started with 31 steins but one fell to the ground while placing them on the table and another lost too much beer during the trip over. BUT STILL! He made it across the finish line with about 154 pounds of beer and glass in his probably very huge hands. (A full keg of beer weighs 161 pounds, guys. That’s just insane.)

Think you have what it takes to carry some beer steins? Or do you just need a few days of practice? Whatever your goals, joining us on one of our Oktoberfest tours is the perfect first step!