Yes, you read that absolutely, 100%, totally right—Germany has a new sausage-themed hotel. You can’t make this stuff up.

Located in Rittersbach, Germany, less than two hours north of Munich, is what happens when a German butcher opens a hotel. And they say it’s a vegetarian’s wurst nightmare. (That won’t be last time I use that pun so zip it.)

This new sausage hotel, known as BB&BB (Boebel Bratwurst Bed and Breakfast, so romantic) is the brain child of butcher Claus Boebel who I’m assuming is single? No? The hotel features seven rooms and the slogan “sleeping under a bratwurst sky” so, clearly this place is where you should spend your honeymoon.

The rooms are decorated, floor to ceiling, in bratwurst, both real and very, very unreal. There are sausage-shaped pillows, bratwurst wallpaper and soap, rooms numbers printed on butcher knives, pig outlines on the headboards, and, for reasons unknown to me, real bratwursts hanging from the ceiling*. I mean, if there’s one thing I’m looking for in a hotel room, it’s being greeted with a butcher knife.

*Update: Apparently there is a bratwurst above each bed “for you to bite into.” Oh, okay, sure. Obviously. 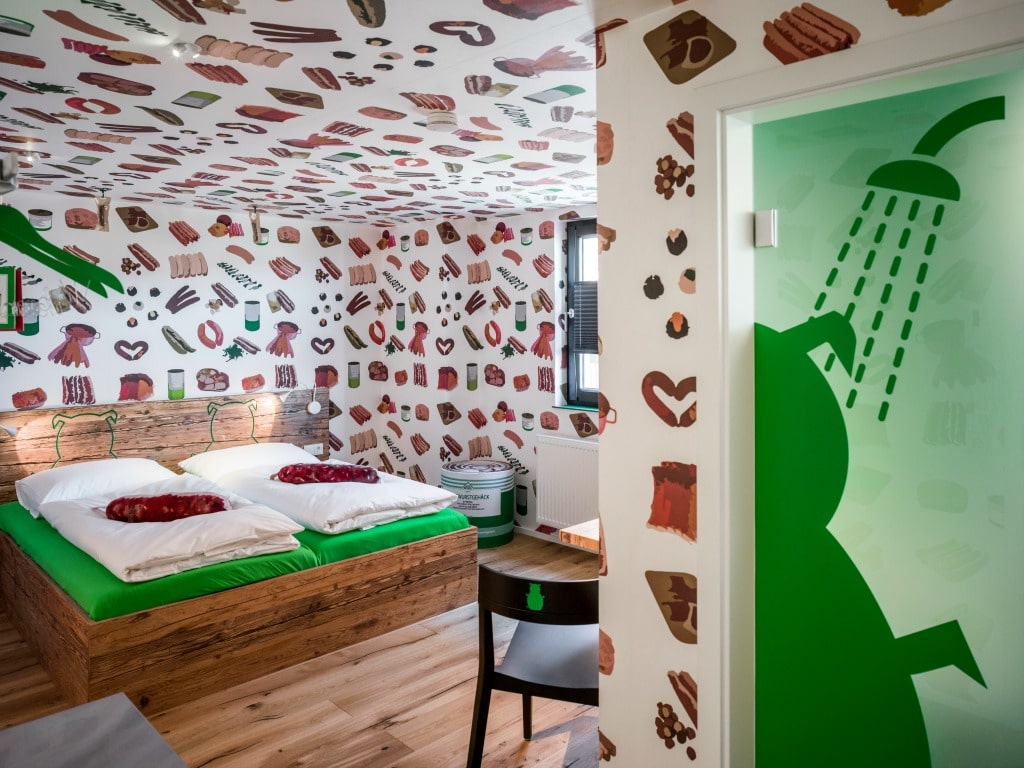 Photo: umdiewurst.de | I literally can’t even with this place.

There’s an on-site wurstaurant (their words, not mine) and breakfast is included in the price of the room – yes, you’re eating sausage so don’t even ask about it. Oh, you wanted sausage ice cream? How about sausage chocolate pudding? There’s a hotel in Germany for that!

During your stay, you can tour the sausage factory (apparently people do want to see how the sausage is made), learn how to make your own bratwurst (the dream!), and even send someone a bratwurst heart along with a handwritten greeting card. *currently rethinking my entire holiday card plan for next year* The prices to stay here seem pretty reasonable (about 100 euros per night) but, really, I don’t have anything to compare it to? Is this a good price for a spending the night in the ickiest section of the grocery store?

Though you may think this would be the bratwurst lodging experience ever, this place actually promises one hell of a sausage party. Check out their video here:

Dying to stay at Germany’s sausage hotel? (Mwahaha!) Why not fit it in before or after Oktoberfest? Check out our Oktoberfest tours here and squeeze it in!