Time to brush up on your Portuguese – Oktoberfest is coming! Wait… what? Well, the world’s second largest celebration of beer and Oktoberfest food, that is – Oktoberfest Blumenau. In what seems like some kind of joke, Oktoberfest Blumenau takes place annually in the city of Blumenau, in the province of Santa Catarina, Brazil. A place you had no idea cared about lederhosen and beer chugging contests so much.

Along with Oktoberfest Kitchener-Waterloo in Canada, Oktoberfest Blumenau is the largest Oktoberfest celebration after the original Oktoberfest in Munich, Germany, and presents one hell of a good time of its own – the only way they know how in the country that brought us Carnival.

We’re going to take it back a bit, back to 1850 when a German pharmacist paddled ashore and founded the town of Blumenau, the way German pharmacists tend to do. His name was Hermann Bruno Otto von Blumenau and is that not the most German name you’ve ever heard? He and 17 other German immigrants built a town in the traditional German architectural style that today is home to almost 300,000 people.

Oktoberfest Blumenau dates way back also, to 1984. And while we were dealing with big hair and even bigger shoulder pads, Blumenau, Brazil was dealing with a big water issue. The city of Blumenau is located in the valley of the Itajaí River and, after a devastating flood, created Oktoberfest Blumenau as a way to boost the city’s economy as well as morale. Beer? Dirndls? Boogie-ing? Mission accomplished, I’d say! Mixing samba dance moves with oompah music? That’s just a spectacular bonus.

Oktoberfest Blumenau has been successful from the get-go with anywhere between 500,000-700,000 people joining the party each year for the 18-day festival.

OKTOBERFEST BLUMENAU | WHEN, WHERE, AND HOW MUCH?

In another confusing move, Oktoberfest Blumenau actually takes place in October, unlike the original Oktoberfest in Munich which begins around the middle of September and ends on the first weekend of October. What? Having visited the Munich Oktoberfest many times, this just makes no sense to me at all. None. Oktoberfest in October, interesting concept. Parque Vila Germânica in the Bairro da Velha is where the German party is at—a strange sentence in and of itself. Festival venues open at 18:00 during the week and 11:00 on the weekends. 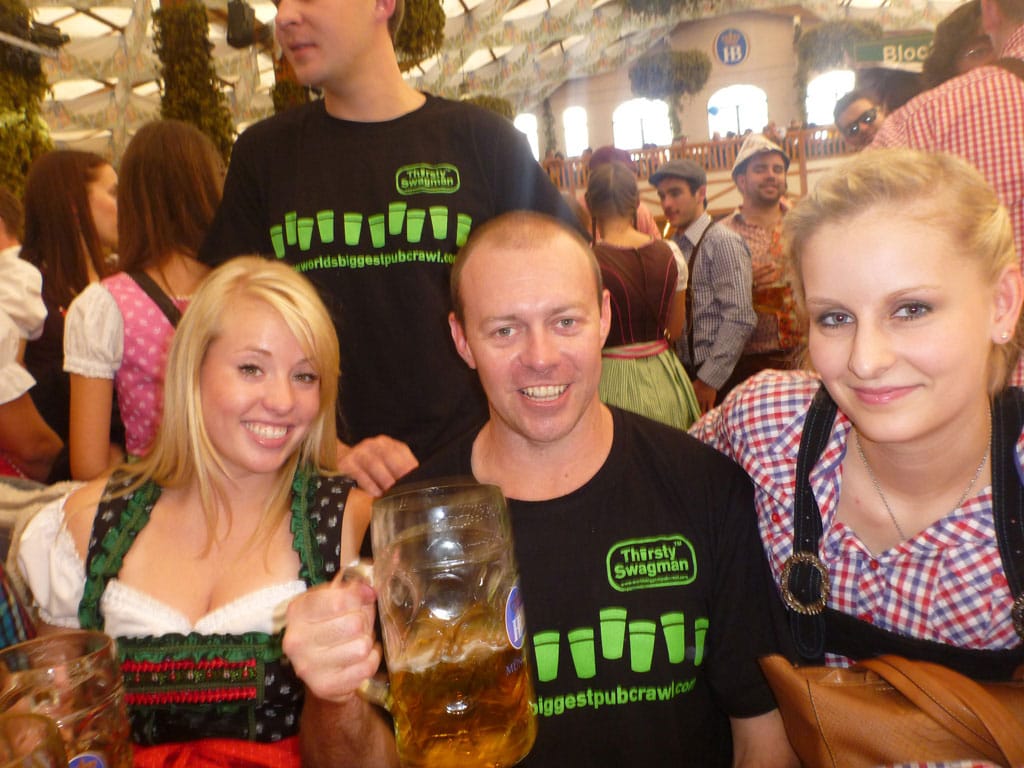 Unlike the original Oktoberfest, the Blumenau festival in Brazil runs in October

On opening day and the last day of Oktoberfest Blumenau admission is completely free – as is any other day you show up in traditional Bavarian dress. If you’re anything like me and prefer only to wear your dirndl on days that end in -y, you’ve got nothing to worry about. The rest of the festival the prices differ but you can expect to pay between R$12 and R$40 which is something like $3-$12 USD.

OKTOBERFEST BLUMENAU | WHAT TO EXPECT

While Oktoberfest Blumenau is not as wild and cuh-razy as its German counterpart, there’s still no shortage of excitement and making questionable life choices. Like in Munich, Oktoberfest Blumenau celebrates their adopted German heritage with big parades, big food, and big shooting matches. You’ll find traditional German costumes and dancing, oompah music and German singing, and the same encouragement to drink far beyond your physical capabilities. You’ll eat pork ribs, sausages, veal, red cabbage, and sauerkraut and celebrate Germany by drinking Brazilian beer like Brahma, Bierland, Eisenbahn, and something called, appropriately, Das Bier.

Unlike in Germany, you’ll meet Vovó e Vovô Chopão (Grandma and Grandpa Chopao), the festival’s official mascots – because if there’s one surefire way to discourage getting completely hammered, it’s having your grandparents show up to the party. 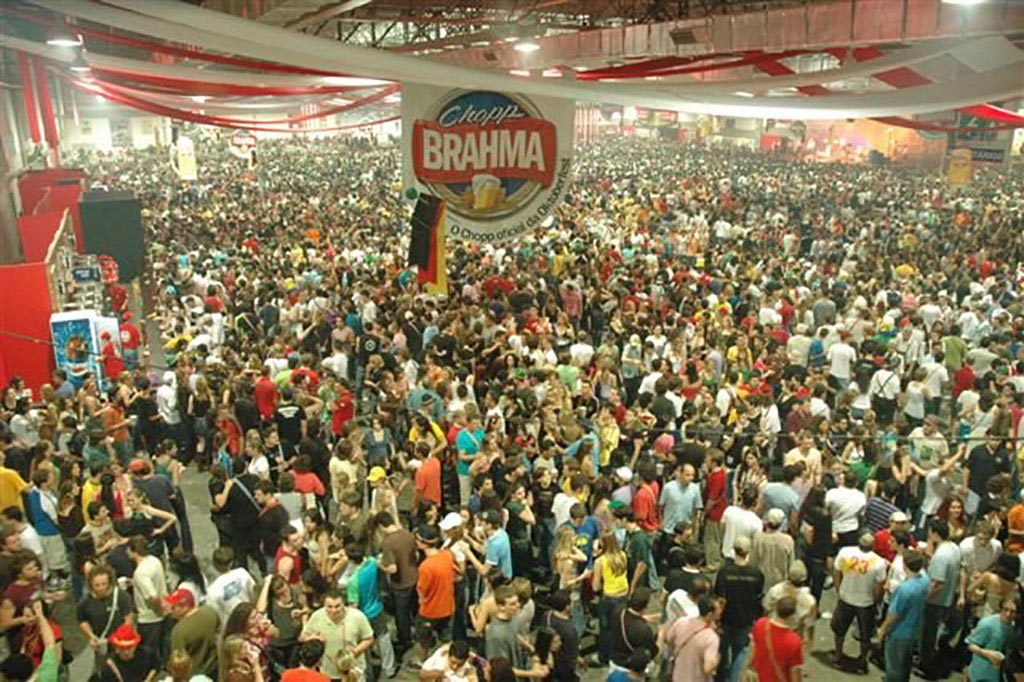 It’s a massive party at Oktoberfest Blumenau, with over half a million people attending. (Author: Diegoodorizzi / Wikimedia Commons / Public Domain)

Oktoberfest Blumenau takes things to a whole new level of “How you doin’?” with their pageant for Oktoberfest Royalty. Each year one woman is crowned Oktoberfest Queen with two more earning the title of Oktoberfest Princess. A new queen is chosen every year on the last Sunday of the festival from ten candidates. They compete in events like – now bear with me because this was all translated from Portuguese – posture, communication skills, friendliness/sympathy, beauty, and “catwalking” which I really hope involves chasing a ball of yarn down a runway. 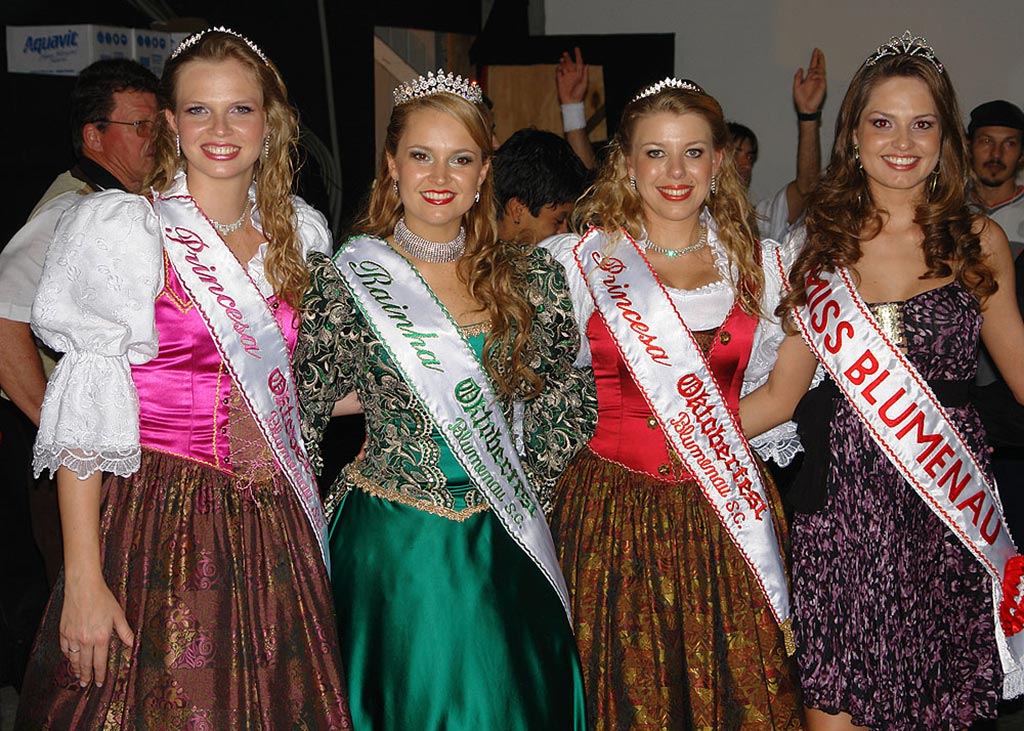 The highlight of each night (except the first and last) of the festival is the Chope em Metro – the metre beer chugging contest. Entry is free and anyone over 18 can participate in this event that involves chugging a beer from a metre-long glass (600ml) in separate male and female competitions. Whoever can finish their metre the fastest – without spilling or taking his/her mouth off the glass – wins. At the end of the festival, the contestant with the overall shortest time wins the title of festival champion and probably has very proud parents. 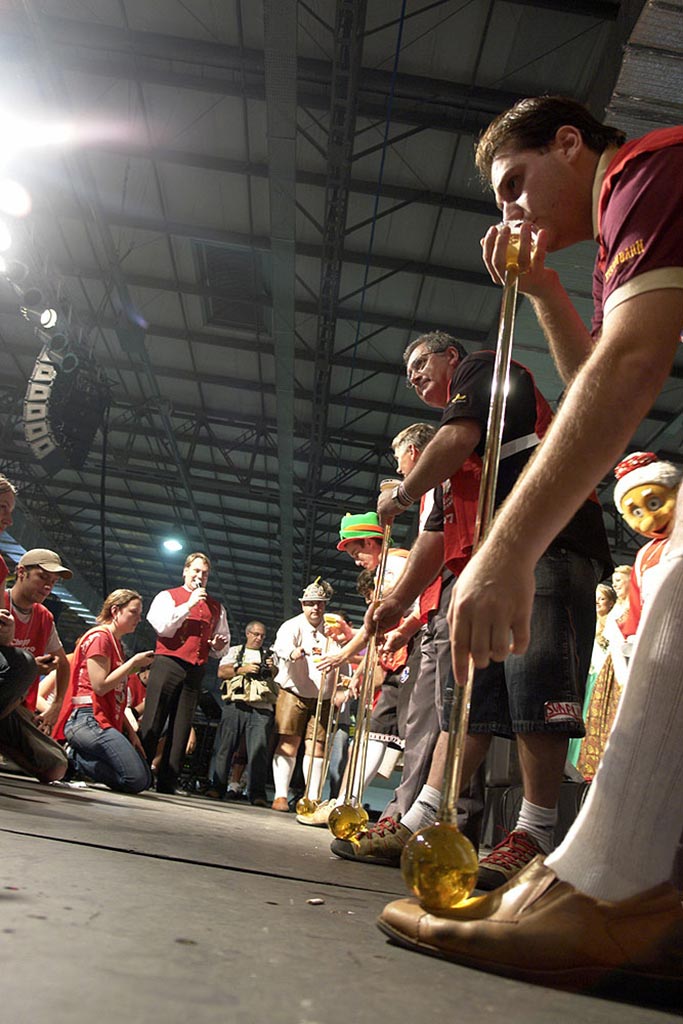 The “Chope em Metro” is a highlight of the event

If you find yourself on the other side of the world and want to celebrate Oktoberfest, have no fear – Oktoberfest Blumenau has beer! Or even better, since it’s in October, you can actually do both the original in Munich and the one in Brazil the same year. Start here with one of our Oktoberfest tours. 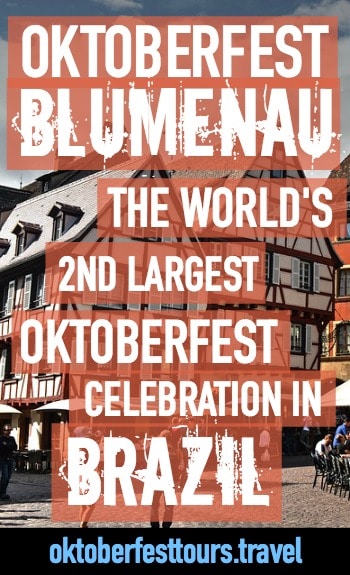 Our Oktoberfest Blumenau tours are coming! Contact us today for details.