Oktoberfest Trivia You Need to Know Before You Go

Think Oktoberfest is all brats, brews, and boobs? Think again! Actually, in a lot of ways that is true, but still. What I’m trying to say is, there’s a lot of Oktoberfest trivia you probably don’t know. A lot of secret goings-on and strictly in-the-know information. There may even be a hidden staircase or two. I’m just speculating, of course, but I dunno… maybe…?

Well I’m about to spill the beans on all the Oktoberfest trivia I do know and I’ll get back to you on those secret passageways.

Oktoberfestivities (I’m trademarking that) can’t officially begin until the Lord Mayor of Munich taps the first keg at noon on the first day. But you already knew that because this isn’t the first time you’re hearing about Oktoberfest, now is it? Well, did you know the record for least strokes it took to tap the keg is two (by Christian Ude in 2005, 2008, 2009, 2010, 2011, 2012, and 2013, and by Dieter Reiter in 2015, 2016, and 2017)? Or how about the most strokes it took to get the beer flowing: a record embarrassing 19 strokes by Thomas “a little weight training never hurt anyone” Wimmer back in 1950. O’zapft…almost wasn’t!

There is a lot of beer served at Oktoberfest each year—7.5 million litres, to be exact—and not a drop of it is produced outside Munich city limits. Though it’s now reached worldwide appeal, Oktoberfest is, and always will be, a Munich festival brought to you exclusively by: Augustiner, Hofbräu, Löwenbräu, Spaten, Hacker-Pschorr, and Paulaner breweries. You won’t find any of those Schmudweisers or Bores Lights here.

…And when I say 7.5 million litres exactly, I mean exactly. Not a drop less. And how can I be so sure? What, is there some sort of beer police squad that monitors the pouring of beer in Munich? You bet your ass there is!

It’s called the Verein Gegen Betrügerischen Einshenken which translates to “Association Against Fraudulent Pouring” and you just can’t make this stuff up, people. This “beer police squad” (or would you prefer Hill Street Brews? CSI: Munich? Brewski and Hutch? Come on! Miami Weissbier?) was formed in 1899, currently has 4,000 members including our heavy-hitting former mayor Christian Ude, and polices beer gardens and festivals for litres where the beer doesn’t reach the line. Can you think of a greater public service?

So how many Einsteins does it take to screw in a light bulb at Oktoberfest? This may sound like an oddly specific joke, but we now know the answer is simply “one”.

As Oktoberfest trivia luck would have it, it turns out that back in 1896, 17-year old Albert Einstein worked as a lighting technician at Oktoberfest. Helping out with his dad’s electric company, he was tasked with screwing in the light bulbs for the Schottenhamel tent. Talk about enlightening work. This was at a time when electricity was just becoming a thing–who knew Einstein was so trendy?

You know how heavy one of those full litres of beer is? And how it’s so impressive to see the servers who can carry like four in each hand? Pshh, CHILD’S PLAY!

A little over a year ago I wrote about Matthias Volkl, the 2016 Masskrug champion, who set the world record by carrying 27 full beer steins (that’s 137 pounds-worth) for 131 feet with only his two hands and his two Popeye-shaped arms. Well, this year that record was broken by his arch nemesis Bluto, er, I mean Oliver Strümpfel.

A year after Volkl’s triumph, Strümpfel carried 29 full beer steins (>152 pounds) the required 40-metre distance to break the world record of 27 and his personal record of 25. Guys, can we all agree they should start serving spinach at Oktoberfest?

The powers that be understand how hard it can be to find the nearest mailbox after consuming a few litres—a problem that plagues us all. So they came up with a solution—popping a tiny post office right there into the Wiesn during Oktoberfest. Now you can send your postcards and letters to loved ones with ease.

In 2017 there was an increase in mail sent to Scandinavia and the Netherlands and a decrease in letters sent to Australia and Italy from the Oktoberfest grounds. How’s that for obscure Oktoberfest trivia, huh?

Aloisius. That weird mailman in the sky. German Mario. At Oktoberfest, Aloisius is the Hofbräu tent’s mascot who spins around on his cloud above the crowd. Though he seems completely out of place (Shouldn’t he be chasing down a princess in a castle or something?) his presence is actually divine.

Once upon a time Aloisius lived in Munich and maintained a regular presence at the Hofbräuhaus, not too different from myself. He dies—probably something to do with his tiny feet—and goes to Heaven. But Heaven has no beer (umm, I thought that was the point?). Because of this, Aloisius complains and gripes and whines until God just-can’t-even with Aloisius anymore and decides to work out a deal. He assigns him the job of official messenger between God and the Bavarian government (sure), allowing him to visit his precious homeland on the reg’. However, the minute he arrives back in Munich he heads straight for the Hofbräuhaus where he continues to sit to this day. 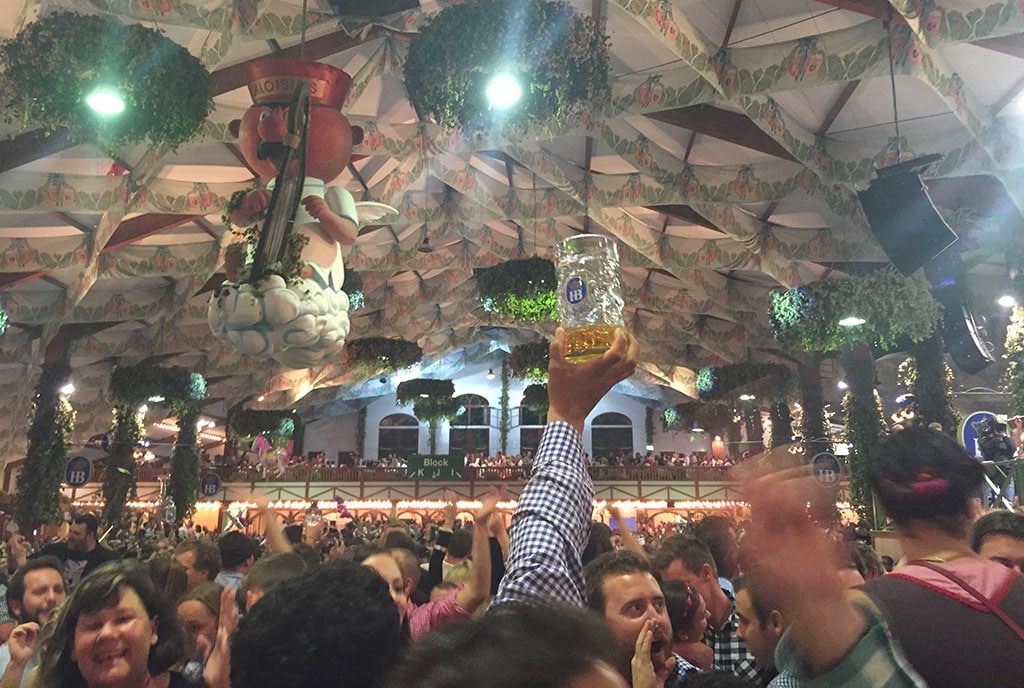 Oktoberfest Trivia: A beer is raised to Aloisius

Each year during the second weekend of Oktoberfest, Italian visitors swarm the Theresienwiese for what has become known as “Italian weekend”. All weekend, Munich newspapers are printed bilingual German/Italian, traffic reports are given in both German and Italian, and the number of designer sunglasses popping up in lost and found hits an astronomical high. Probably.

In case you wanted a little more leather than usual, head to Oktoberfest on the first Sunday—unofficially known as Gay Sunday. Hosted by the Munich Lions Club, Gay Sunday packs the Bräurosl tent 8,000-strong for one of the most fabulous celebrations of the year and the largest of the LGBT events at Oktoberfest. A little less oom-pah-pah, a little more Gaga.

Because of course there should be weapons at a beer festival. The crossbow competition (seriously, you read that right) takes place every year in the Armbrustschützenzelt and has since 1895. The German crossbow championships take place here annually in the adjoining shooting tent where you won’t find me anywhere near. Middle age weaponry? No. New age pop music played on an accordion? Hell yes! 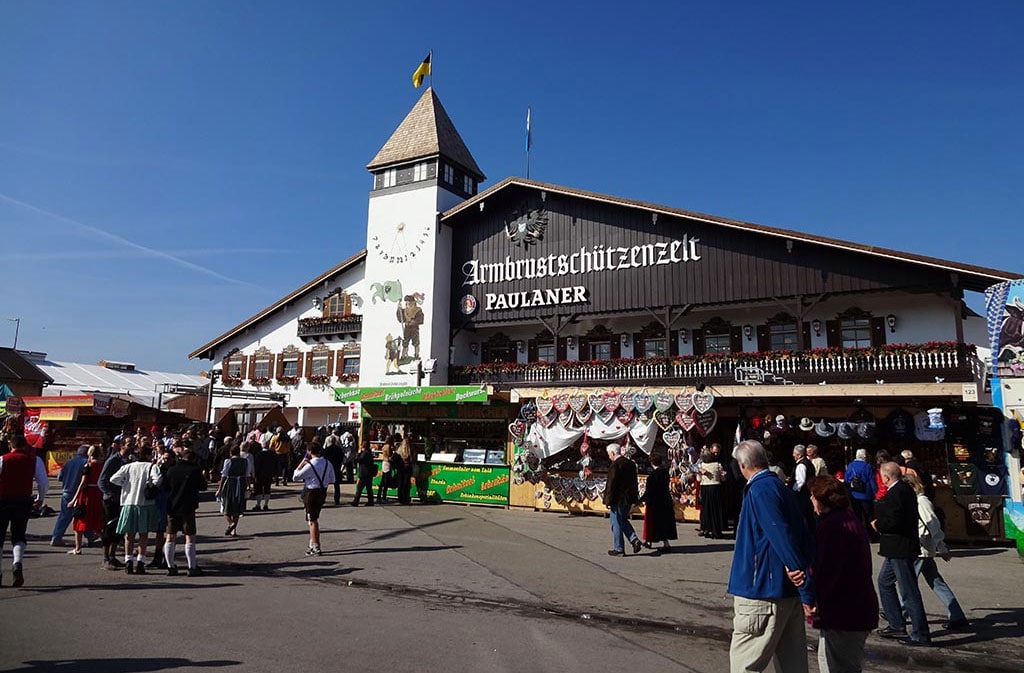 Oktoberfest Trivia: The crossbow competition is held at the Armbrustschützenzelt

First of all, no, I’m not talking about soda. (Soda? What’s that? How much alcohol does it have?) I’m talking about the white stuff you’ll see being sold, completely legally, at Oktoberfest. And not just by some guy behind the beer garden; I mean by tent servers.

What’s known around the tent corners as wiesn koks may look like something you could get arrested for at the airport but is actually just a mix of glucose and menthol. Oktoberfest-goers snort it for an instant wake up—a quick sugar rush and some cool-as-ice sinus-clearing. So I’ve heard. It’s drug free, totally legal, but frowned upon by tent authorities and I think you can see why.

Reading the list of articles left behind at Oktoberfest is the only reason to get up in the morning after Oktoberfest has come and gone. The Wiesn lost and found is a proverbial treasure trove of potential Oktoberfest trivia. For instance, just last year, Oktoberfest visitors left behind: 1,300 passports, 600 wallets, 520 smartphones, 360 keys, 325 pairs of glasses, a set of dentures, a pair of crutches (“It’s a miracle! I’m healed!”), a license plate, 620 pieces of clothing, and a drinking horn. Great, who invited the Viking?

Want to experience the magic of Oktoberfest trivia for yourself? Claim your spot on one of our Oktoberfest tours! 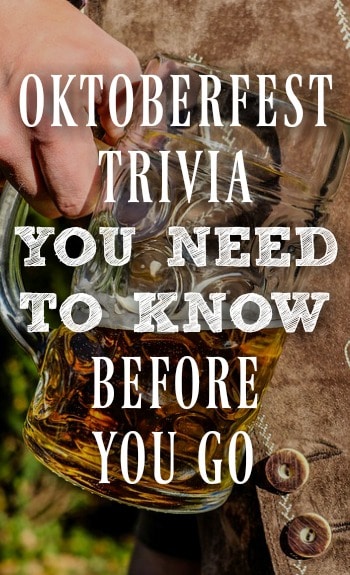