Who would have thought that a festival known primarily for its beer could become the world’s largest fair? Well, we did of course! If you haven’t guessed it already we’re talking about Oktoberfest, and yes, it is the largest fair in the world.

For us it’s the chance to kick back and enjoy numerous beers surrounded by many of our best friends, and while beer drinking is the name of the game for most visitors to Oktoberfest, the original fair in Munich actually offers plenty more to see and do.

So we thought we’d take a look at the history and traditions behind Oktoberfest.

Where Did Oktoberfest Originate?

You probably already know the answer to this if you know anything about Oktoberfest! Though there are literally hundreds of smaller festivals that now take place in all corners of the globe each year, the original, and perhaps arguably the best, is in Munich.

The capital and largest city of the German state of Bavaria, Munich is a beautiful city and, if you have any interest in sightseeing there are numerous landmarks to look out for such as the Nymphenburg Palace and the New Town Hall which are worth a look; that’s if you can tear yourself away from the landmarks of Oktoberfest, i.e. the beer tents!

The Origins of Munich’s Oktoberfest

So what made the good citizens want to celebrate each October by drinking lots of beer?

It was the marriage of Crown Prince Ludwig (later King Ludwig I) to Princess Therese of Saxe-Hildburghausen on October 12, 1810, and the citizens were invited to enjoy the festivities on the fields in front of the city gates. These fields were named Theresienwiese (Theresa’s Meadow), in honour of the Princess, and they’ve been called this ever since, though you’ll hear it abbreviated to Wiesn by the locals. 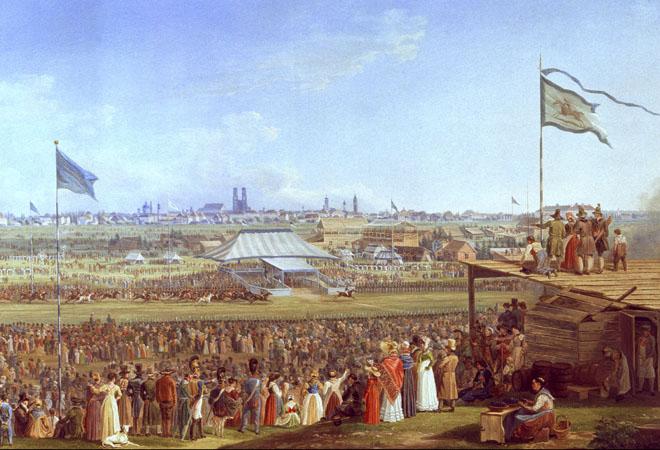 Oktoberfest as it would have looked in 1810

The horse races that took place on the fields that day were so popular that they decided to do it again the following year, and in 1819 they made it into an annual festival, so it was actually horse racing not beer that started Oktoberfest! Since then it’s happened every year bar 24 (because of war and cholera epidemics).

If you’re a beer lover you’ll be pleased to hear that at Munich’s Oktoberfest you can’t buy any old beer! There are strict rules for those that can be served, and they must meet the Reinheitsgebot (Bavarian Purity Law). This states that the beer must have a “Stammwürze” of 13.5%. This isn’t the alcohol content but it’s a measurement used in brewing that gives an alcohol content of about 6%. The other criteria is that the beer must be brewed within Munich’s city limits.

So the beers here are stronger than you’d find in most German pubs, ranging usually between 5.8 and 6.3% and with a high sugar content. Be sure to supplement your drinking with some of the great Oktoberfest foods such as pretzel, Würstl, Weisswurst, and Sauerkraut, and don’t combine drinking with the amusement rides unless you want to make a large and embarrassing mess!

Why not join us in Munich for this year’s Oktoberfest?