The Marstall Tent: Newcomer to Oktoberfest

What Happened To The Hippodrome?

On April 25 last year, the owner of The Hippodrome, Sepp Krätz was convicted of tax evasion and sentenced to one year and 10 months in prison along with a fine of €570,000. As such, Krätz lost his brewer’s license, his taverns and his right to his tent at Oktoberfest.

With the sentence and loss, it ended a 111-year tradition. The Hippodrome was the first tent to offer a schedule of entertainment along with its beer and food and in 2006, Paris Hilton brought her champagne in a can, starting a scandal that resulted in a rule that no more advertisements could be filmed at Oktoberfest.

View our “Memories of Hippodrom” gallery.

The New Tent and Hosts

In August, Siegfried Able and his Marstall tent was announced as the new Oktoberfest host. The Able family have been in the beer industry since 1982 and have been hosts of the smaller Kalbs-Kuchl tent since 2008. Able has been trying for years to get a large tent and in 2012 and 2013 he got his tent concept in third and second place respectively. 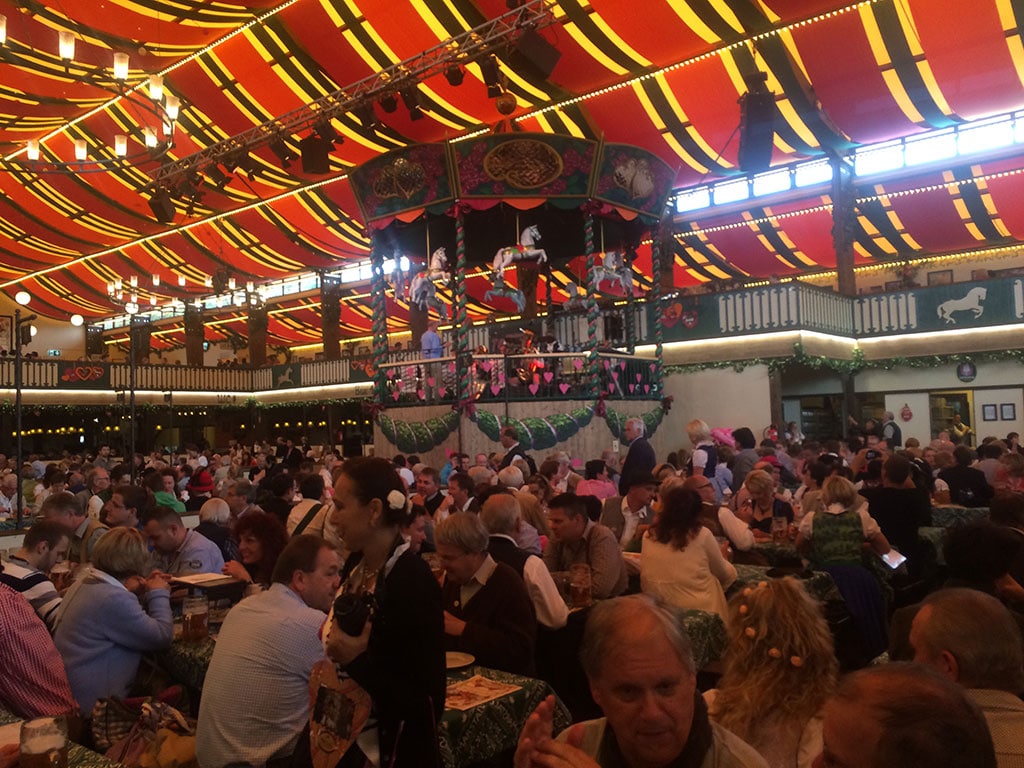 Inside the new Marstall beer tent

Inside The New Tent

Outside, The Marstall features a candy-coloured façade with heart-shaped windows and roses made of metal. The Marstall tent is fashioned after Oktoberfest’s equestrian roots, where there used to be horse races on the grounds and inside some of tents (including the Hippodrome, ironically enough). As such, the horse is the guiding symbol in the Marstall tent with a big carriage featured above the entrance, carved wooden horses decorated around inside the tent, and the musician’s stage which resembles a carousel with horses around it.

The tent will feature a lively brass band, freshly poured beers along with fine wines, and a menu containing regional specialities. There will be a champagne garden on the floor of the tent, beer benches upstairs, a 1050 square foot continuous balcony which will seat 1000 people and an in-house medical service. The Marstall can seat up to 4,200 guests: 3,200 in the tent and 1,000 in the beer garden.

The band will play traditional Bavarian music from 12am and live party music from 6.30pm until the evening closes at 11pm.

A look at the new Marstall tent that replaced the Hippodrome at Oktoberfest.

How the New Host Describes the Tent

Siegfried Able said his new tent will present an entirely new environment with top-notch cuisine, warm and friendly service and a unique festival atmosphere. He described the tent as being more like a permanent restaurant than a tent, with no temporary feel to it at all.

Of course, since the Ables have secured their large tent, it’s the end for the Kalbs-Kuchl. Since 2008, the Kalbs-Kulch was located next to the Bräurosl tent and was decorated like an Alpine cabin with a room of old Swiss pine.