Every year a city situated along the Itajaí River in Brazil with a population of just under 300,000 plays host to the country’s largest celebration of its German heritage, Oktoberfest Blumenau, attracting crowds of up to 5 million.

Stepping off your flight, you won’t believe you’re standing on the South American continent. Not too long ago, Blumenau celebrated its 31st instalment of the historic occasion, kicking off the eighteen-day festival with an opening procession down the city’s European-inspired Rau XV Novembro (November 15th Street). This street, formerly known as Wurstrasse or ‘Sausage Street,’ winds its way through Blumenau for almost 1.6 kilometres and features hundreds of attractions for the beer aficionado.

At the conclusion of the parade, locals and visitors alike head towards the city’s Parque Vila Germânica where the majority of festivities takes place. Last year, Oktoberfest organisers estimated that during opening night alone over 19,000 people passed through the Parque Vila Germânica.

Unsurprisingly, the specially built area contains replicas of German buildings, houses and additional pavilions designed to evoke a familiarity that festival-goers to its larger counterpart in Munich know all too well.

While entry to the festival grounds on opening night has always been free, all other days are not, with the exception of Mondays and the closing night of the festival. Tuesday entries run about R$10 and on Fridays and Saturdays festival entry increases to R$25.

Making Your Way Around The Event Of The Year

The grounds are packed with numerous shops, beer kiosks and restaurants. Live performances by Austria’s Bürgermeisterkapelle are supported by the feel good tunes of the German band Deggendorfer Stadmulsikaeten and provide a brilliant and lively soundtrack to the joyous beer drinking celebrations.

In similar scenes, Oktoberfest Blumenau explodes with action on the dance floors and conversation over the beer tent benches. With beer steins and plates piled high with German meats, everything about the festival calls you back to a better time of fun and frivolity complete with accordions and the crowning of the Queen of Oktoberfest. 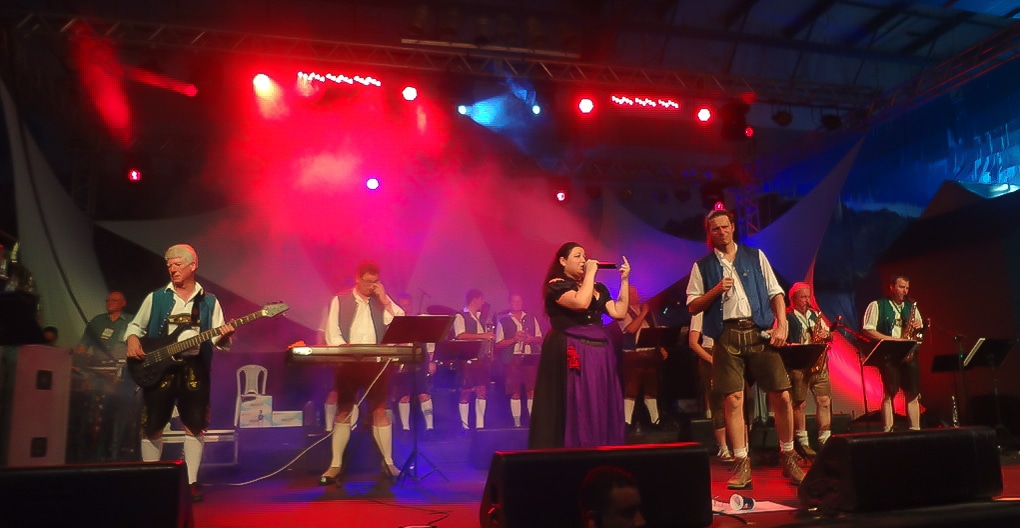 Tourist Attractions and Other Sights to See

If at any point you happen to wander away from the festival, there are plenty of other things to do and see in Blumenau. One of only five electronic ‘flower clocks’ in Brazil, the Relógio das Flores, stands like a beacon attracting the attention of curious travellers.

Museums such as the Museu da Família Colonial and Blumenau’s City Hall, constructed in 1982 and inspired by the colonial period, remain points of interest among the many others that the city has to offer year round.

For those interested in travelling to the South American city, keep in mind that you’ll need to get there from Rio de Janeiro by bus or car as Blumenau has no airport terminal.

If you’ve done the run at Oktoberfest in Munich before and have yet to experience the German-inspired festivities of Brazil’s Oktoberfest in Blumenau, it should definitely be at the top of your To Do list in 2016.