Ladies and gentlemen, this is your captain speaking. Your German beer drinking captain, that is, and you’re in for a very smooth ride. Because your Oktoberfest adventure will most likely begin and end at the Munich airport, so should your beer drinking. And because this is, in fact, Munich, Germany, we’re not talking about a lame airport bar with sticky bar stools and a cranky, bearded old bartender. We’re talking airport brewery – with all the magnitude and revelry you’ve come to expect from the host city of the largest beer festival in the world. This is Munich’s Airbräu, Europe’s only airport brewery.

The Airbräu brewery at Munich airport has everything you’d want and expect from something with that distinction: a tavern, a restaurant, Europe’s largest roofed-in beer garden with seating for, no joke, 600 people, traditional Bavarian food, delicious beers brewed on-site in the airport brewery, live entertainment, and space to host your company or organization’s pub night. Pub night? Is this really a thing? No company I’ve ever worked for has hosted a “pub night!” Moving on…

Who needs lounge access when you can visit a brewery at the airport instead? (Photo: munich-airport.de)

Munich’s Airbräu is Europe’s only airport brewery and all of their beers are brewed on-site inside Flughafen München. They are committed to sustainable brewing practices (yay Earth!) as well as using only regional ingredients—not hard when you’re located pretty damn close to the hops-growing capital of the world. They have a master brewer and aren’t afraid of a good air travel pun or two. Tours of their airport brewery are also offered.

Airbräu’s airport brewery tours are 30 minutes long, cost 8.5€ per person, and, yes, include a beer tasting. Groups between 10-20 people pay just 6.5€ each and those on school tours pay just 2.5€ each. Hold up—school tours? Why did I go to the zoo every year when these German kids are touring breweries? Moving on… 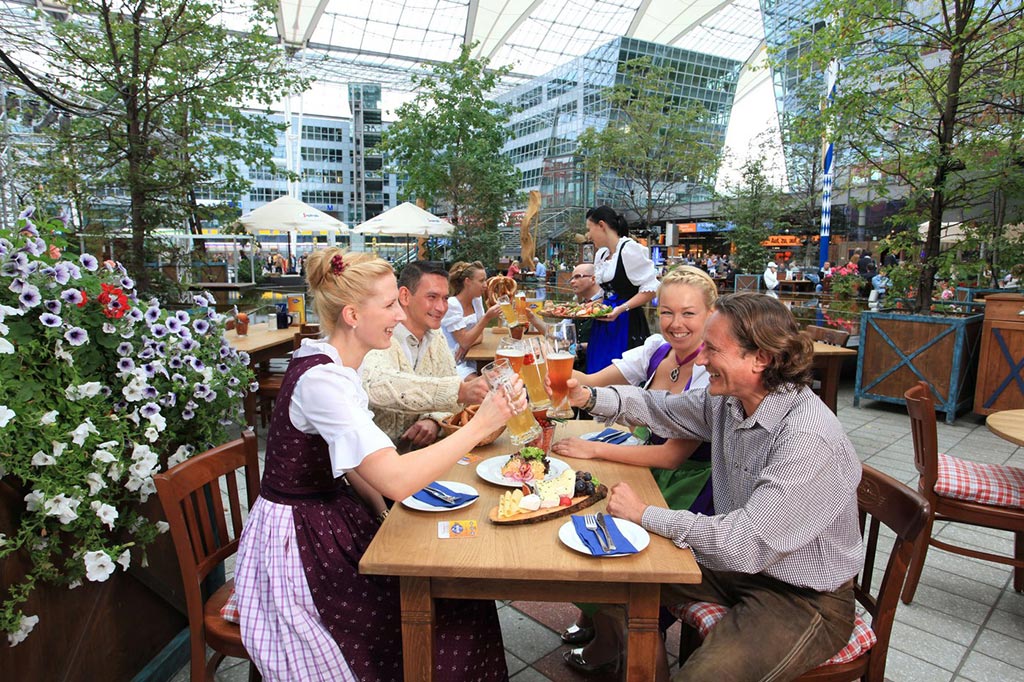 Some of their year-round beers include: 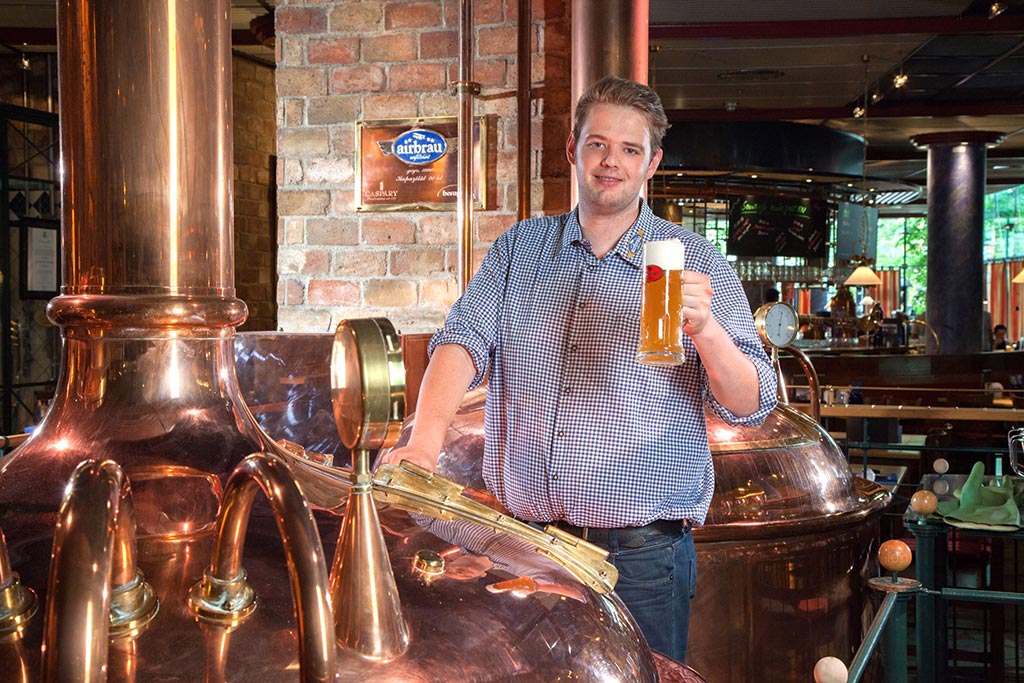 The beer is brewed on-site at Airbräu in Munich. (Photo: munich-airport.de)

The Airbräu airport brewery also has a rotating selection of seasonal beers including: Aviator the dopplebock, Mayday the malty weissbier, Airnten the light summer beer, Krampus the robust winter beer, and, my personal favourite, the Airbräu Festbier.

Whichever Airbräu beer you prefer, they offer party kegs for your take-away pleasure. These totally count as carry-ons. Who needs underwear and toothpaste anyway?

Because every beer garden worth it’s weight in weissbier serves up hearty traditional Bavarian fare, right? The Airbräu airport brewery is no different. Secure those tray tables people ‘cause they’re about to be loaded up with pork knuckles, schnitzels, and—what goes best with air travel?—pretzels! Not to mention the pork sausages, roast ducks, and potato soups that might make taking off a tad more difficult. They’ve got breakfast, vegetarian options, a buffet, and something they call the “last meal” – a glass of tap water, one bread roll, and a cigarette to smoke outside. I love when my dark beer is served with a side of dark humour, don’t you?

Traditional Bavarian food is served up at Airbräu. (Photo: munich-airport.de)

When you arrive in Munich, don’t be so quick to run screaming from the airport in search of the nearest beer garden—there’s one right there! And with on-site brewing, traditional Bavarian food, and being truly one-of-a-kind, it’s a pretty damn good one. Stop by again before you depart Munich—why should your Oktoberfest celebration end at the Weisn?

Missing this year’s? Have no fear! Check out our tours for next year’s Oktoberfest–it’ll be here before you know it.