When I lived in Germany, being away from home for the holidays seemed like an awful idea. There was no way I was going to shell out thousands of dollars to fly back to Canada so I had to get used to the idea of spending my first Christmas in a foreign country–and hours exploring the German Christmas markets–alone.

But I decided to suck it up and enjoy the country all a-twinkle and festive like.

Mostly I comforted myself by attending the endless German Christmas markets and consuming copious amounts of glühwein (mulled wine, the most delightful drink on the planet). By the time German New Year’s rolled around, I barely missed home.

Berlin is an easy place to start since I lived there. My favourite of all the German Christmas markets in Berlin was the Gendarmenmarkt, located in the city’s prime real estate between Französischer Dom and Deutscher Dom — two nearly identical cathedrals. It’s unbelievably beautiful.

My friend introduced me to this place so we bought mugs of glühwein and wound our way between the many stalls selling handicrafts, Christmas ornaments, and wood carvings. It’s also here that I first tried flammkuchen — a crispy, pizza-like food that will warm your insides even more so than the wine.

Gendarmenmarkt is also a hub for entertainers, including everything from jugglers to classical choirs. But, seeing as how this is Berlin, you can sometimes expect to find a fire-eater thrown into the mix. 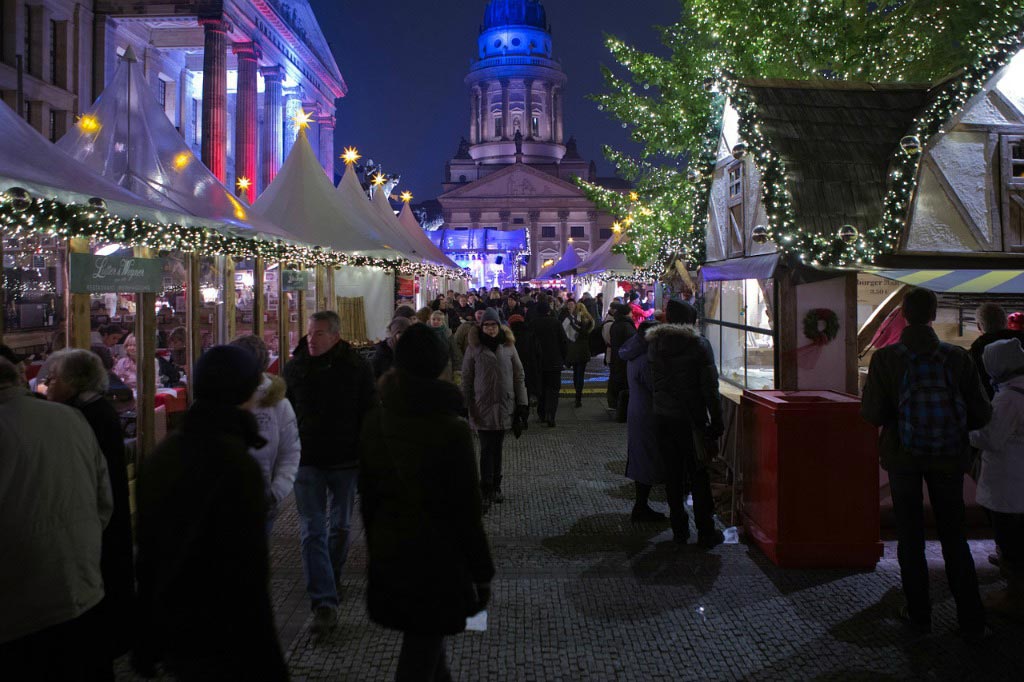 Berlin is famous for its quirkiness, so it’s no surprise that some of the city’s German Christmas markets are a little more alternative than others. My favourite is the Japanese Christmas Market, where you can watch people dress up like sumo wrestlers and wrestle it out in a giant ring. Or you can order Japanese-style hotdogs and sit around a fire outside. Neither of these things has anything to do with Christmas, but that’s okay.

Another one of my favourites is the rooftop market at Klunkerkranich which takes place every Saturday and Sunday and overlooks the city for miles. There’s often a band playing, and this market errs to the artsy side. You’ll find people selling all sorts of wares here, from paintings to jewellery to homemade Christmas gifts.

Admittedly, I haven’t visited Ravenna Gorge — I was way too caught up in my Berlin life (and rightfully so). But there’s no way I could put together this round-up without including this Upper Black Forest Christmas market set against the ridiculously stunning background of Ravenna Gorge, with its 40-metre high viaduct of the Höllentalbahn railway lit up in an incredible light display.

Want to try some real Bavarian food? You can do that here, too. Cinnamon topped waffles, oversized sausages, roasted chestnuts, and some hearty meats are all on the menu. Plus you have to try Feuerzangenbowle, a glühwein-type drink topped with rum-soaked sugarloaf, set on fire. The Germans are wild.

Dresden is already a picture-perfect town, but throw in some classic German Christmas markets, twinkling lights, and a ton of holiday cheer, and you’ve got what might be the best little German town ever. The main squares and streets are overloaded with a sea of lights, and more than a dozen markets take over the entire city from November to the end of December. 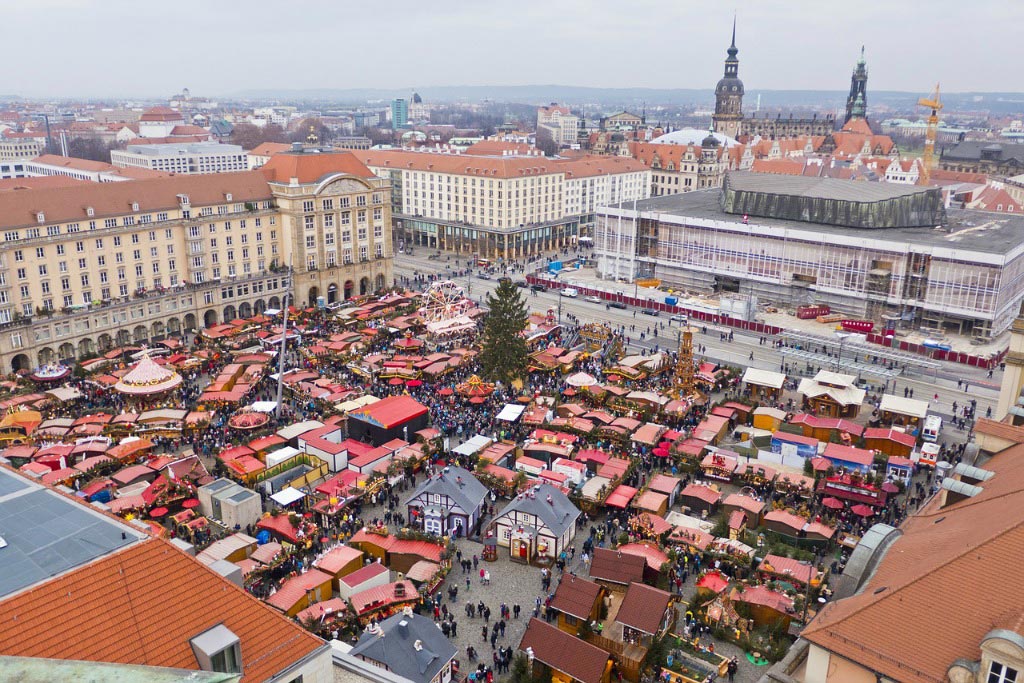 The Striezelmarkt is the main market, and the oldest of the German Christmas markets, dating back to the 15th century. You get the full experience here: traditional food stalls, handmade wooden crafts (there are some seriously good shopping opportunities here), and plenty of hot drinks. But the crowning event is the Dresdner Stollenfest, where a fun parade marches through the Old Town and a giant stollen (fruitcake, basically) is cut into thousands of pieces and shared amongst all those in attendance.

I know. Fruitcake. Still, the spectacle is worth it.

People don’t often think of Stuttgart as a particularly pretty city, but the cobbled squares are home to over 300 stunning stallholders during the Christmas market season, and the decorations are out of this world.

Must-do: go to the courtyard of the Old Palace every evening for impressive performances from choirs and musicians. Plus there’s a gigantic Christmas tree at the centre of it all, so your Instagrams will be on point.

Christkindlesmarkt is one of the most famous German Christmas markets, dating back to 1628. Most of the hubbub takes place in medieval Hauptmarkt, Nuremberg’s largest square. During the holiday season, this place is transformed into an enormous market jam-packed with festive spirit. I promise you, it’ll convert even the scroogiest of Scrooges. 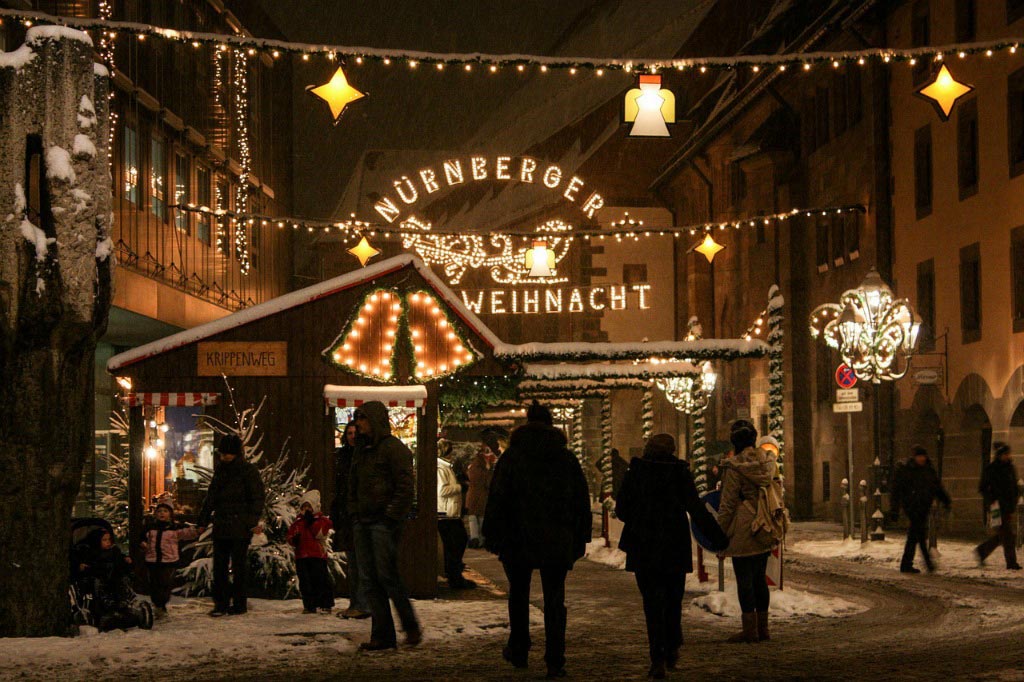 Shop for handmade presents between glasses of glühwein (can’t you tell I love this drink?), while sampling sausages and yummy gingerbread. Even if you’re not travelling with children, the children’s Christmas market is worth visiting just for the delightful chaos of it all. Plus it’s famous for its little men made out of dried prunes.

Those are just a drop in the bucket of awesome German Christmas markets, but truthfully, I’ve never visited a bad one. Find the one closest to you and put your drinking cap on! (A wool one, preferably. Germany is cold.)

If snow and stockings aren’t your scene, check out our Oktoberfest tours to explore a warmer-weather German tradition. 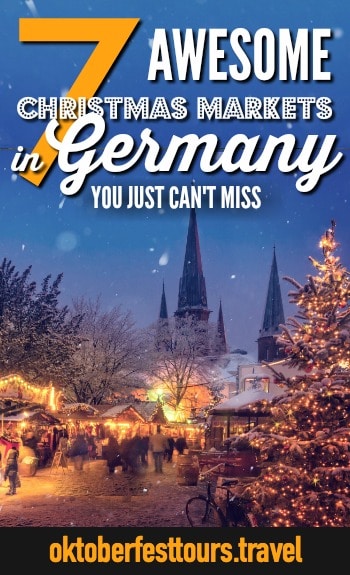