How to do Oktoberfest on a Budget

Oktoberfest was one of the most fun things I did the entire time I lived in Germany. Nothing about the experience disappointed. Oktoberfest is also the only mega festival I’ve ever attended where I didn’t feel overwhelmed the entire time, despite the six-million people in attendance. It’s just that well organized.

It’s worthwhile to note that so much organization pays off, grossing a billion dollars in just 16 days. So yeah, attending the world’s largest beer festival comes at a price.

If you plan accordingly though, you’ll be able to drastically reduce the cost and even do Oktoberfest on a budget.

Oktoberfest on a budget | Accommodations

Let’s tackle the most important point first: book your accommodations way in advance! If you want to get off on the right foot doing Oktoberfest on a budget, you’re going to need to make travel plans at least four months in advance… including booking your accommodations.

Fortunately, the festival carries on for two full weeks, so there is some wiggle room.

When it comes to booking accommodations, the cheaper options are obviously not near the city centre. However, it’s relatively easy to transit back and forth from the Theresienwiese (the Oktoberfest grounds); so if you have confidence in your ability to find your way back home after a full day of drinking, go for it. There are even many well equipped campgrounds for this sort of thing, often with direct transit.

If you’re like me and would rather stumble only a short distance to get home, prepare to pony up the cash. My friend and I booked through Airbnb which seemed the cheapest option above all others. Altogether, it cost us about 335 EUR for two nights… and that was the affordable option. However, we were within walking distance to the festival grounds and we had a full apartment. We did a fair amount of cooking at home.

Saving money this way isn’t without risk though. There’s always the chance your Airbnb hosts may cancel on you. We initially booked a room much further in advance, but the host told us (rather last minute) that she’d mistakenly quoted us too low of a price. The Airbnb host that we did end up going with told us some locals in Munich will rent out their apartments for the entirety of Oktoberfest and have enough money to cover a full year’s rent.

(To be fair, Airbnb compensated us for the last minute cancellations.)

Tip: if you can attend mid week rather than on the weekend, accommodations and transportation are both significantly cheaper.

And remember to plan early. The dates change slightly every year, see here for info on when Oktoberfest is held.

Oktoberfest on a budget | Trachten

Oktoberfest’s traditional get-up (known as Trachten) is unashamedly sexy for both men and women. Some people take shopping for a dirndl or lederhosen very, very seriously. It’s perhaps one of the few things you might want to splurge on, even when doing Oktoberfest on a budget.

The best way to do it: purchase your outfit before you arrive. If you’re already in Germany, this is particularly easy. Otherwise, Etsy and Amazon have some affordable options.

For the dirndl, keep in mind that the hem of the dress should be below the knee. Anything higher is a Halloween costume and you’ll totally be judged for it. My dirndl cost me about 40 EUR in Berlin, as opposed to the 100+ EUR options found all over Munich.

But seriously, dress the part! I can’t stress this enough. You’ll feel foolish if you don’t, and it’s just so darned fun to play dress-up. Ladies, check out this comprehensive guide on how to dress for Oktoberfest.

Oktoberfest on a budget | On the Theresienwiese

Might I suggest filling up on a hearty breakfast before you arrive to the Theresienwiese?  Most hotels offer this service along with your room so definitely take advantage. Prices on the Theresienwiese are NOT cheap! You can always enjoy your traditional oxtail and half chickens later.

Beers are about 10 EUR for a litre, and you’re expected to tip 1 EUR to 2 EUR. It’d be horribly tacky to not tip the beer maids, even if attempting Oktoberfest on a budget — they are busy, and they seriously work hard for that cash. But really, committing to just a couple litres of beer goes a long way. You’ll likely only need a few before you’re dancing on the tables shout-singing “Ein prosit!” with your tablemates.

Know that the food and water is actually the priciest part of Oktoberfest. A small bottle of water will cost you 4 EUR and don’t even think about sneaking anything into the tents, even if you purchased the water on the festival grounds. Hydrate beforehand.

Oktoberfest on a budget | Enjoying Munich

Hey, you’ve made it all the way to Munich — why not actually see some of the city?

(Full disclosure: I saw very little of the city.)

There are tons of free sights around Munich’s city centre including within walking distance from Oktoberfest. You can’t miss the famous Rathaus-Glockenspeil at Marienplatz, for example. This elaborate chiming clock puts on a spectacular show twice every day, portraying a royal wedding, a jousting tournament, and some traditional dance. (It’s super quirky.) Once the show is over, head around the corner to the Frauenkirche Cathedral. You’ll find the devil’s footprint inside, allegedly.

Oktoberfest is also the perfect time to sit back and people watch, even if you’re not on the Theresienwiese. Head to the Englischer Garten to enjoy a bit of green space (with a beer garden, naturally) and don’t forget to check out the river surfers, those brave souls. 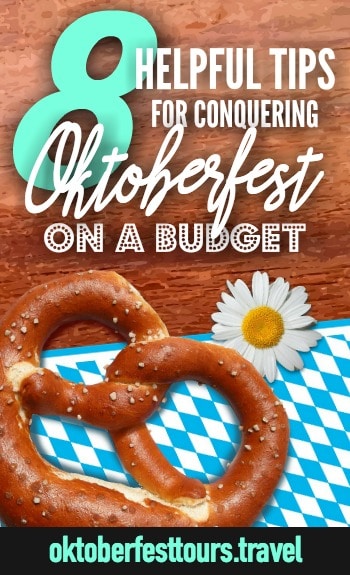