The Löwenbräu Festzelt—which translates to “Lion’s Brew Festival Tent”—features lions all over the place. You can easily find the tent by the rotating lion atop a 37-metre tower above the Wiesn crowd, then you’ll see (and hear) the 15-foot lion drinking beer on the balcony of the tent itself. At regular intervals you can hear him shout “Leewwwwvenbraaiiii” and it’s especially frightening if you’re up on the balcony right behind him.

As far as lions go, this tent is also a favorite of the local TSV 1860 München soccer team—both fans and futbol-ers. The Löwenbräu beer tent is also a favourite among those visiting during Italian weekend—which we assume has nothing to do with lions, unless you know something we don’t? The party inside the Löwenbräu Festzelt is internationally known making this a great place to make friends from all over.

The tent is known for being one of the largest (seating for almost 9,000 all together) and, apparently, most well-lit. The Löwenbräu Festzelt boasts over 16,000 lightbulbs—the most of any Oktoberfest beer tent. In 2016 these traditional bulbs were replaced with LED versions.

Inside, easy-drinking Löwenbräu beer is served along with traditional Bavarian munchies like schweinshax’n (pork knuckle), bratwursts, duck, and even a larger-than-you’d-expect-at-Oktoberfest menu of Italian food offerings. Löwenbräu beer comes to us after centuries of brewing but the name originates around the early 1500s when one of the first brewers moved into 17 Löwengrube (“lion’s pit”). And so today we lift our mugs to a giant lion who chugs beer and talks.

Want to hear the lion roar at this tent? You can do so on these Oktoberfest packages with 5-star reviews. 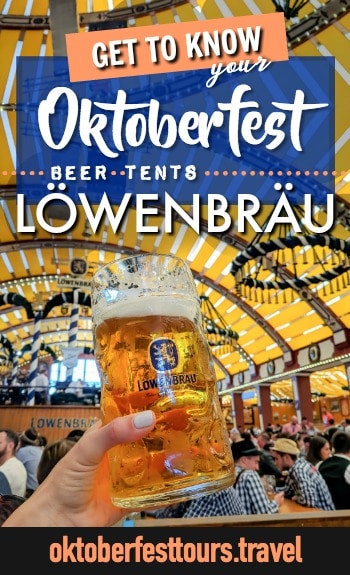