Today, we celebrate Bavarian culture inside a wide array of beer tents—some big, some “small”, but all of them holding the key to the best party of your life. They’re all owned by either independent families or the breweries themselves and construction of the Oktoberfest beer tents begins as early as June and July—around the same time you should start your chugging training.

There are 14 major tents at Oktoberfest in Munich

There are 14 major Oktoberfest beer tents with 14 different personalities, offerings, and vibes. Each of them unique and each of them a fabulous time. And with Oktoberfest in Munich lasting 16 days, you can try them all! Don’t you dare wimp out on us now. Here’s a short description of each, in descending order of capacity:

Only in Bavaria will you see a tent that can hold almost 11,000 people described as “cosy”. And yet, it’s true. Paulaner Festzelt is their name; gemütlichkeit is their game. They say it’s the Oktoberfest beer tent where you’ll end up spending way more time than you planned. When you spot the massive tower with the spinning Paulaner maß on top, you will then have found this tent, also known as Winzerer Fähndl. It is the largest of the Oktoberfest beer tents and the one where you can find the most jovial atmosphere, a local radio station broadcasting from it, and the hottest FC Bayern athletes kickin’ it inside. (ha! Get it?) 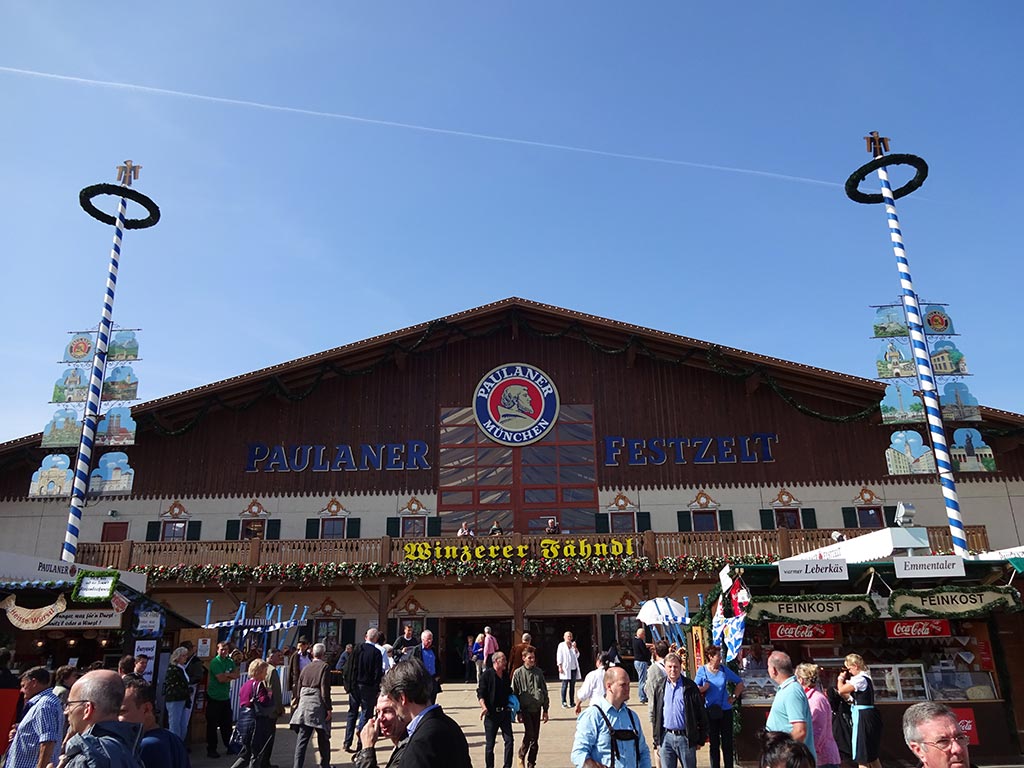 The Paulaner is the biggest beer tent at the festival

The Schottenhamel is the oldest and most important of all the Oktoberfest beer tents. (Its parents would be so proud!) What began in 1867 as a small beer-selling booth with just 50 seats is now the leader of Oktoberfest and the tent that screams, “Calm down! You can drink now!” It’s here in the Schottenhamel tent that the Lord Mayor of Munich taps the first Oktoberfest keg of the year and shouts, “O’zapft is!” to start the two-week beer flow. This tent is all about fun and some of the best roasted half-chickens in Munich.

This tent is the offspring of Munich’s world famous Hofbräuhaus that has been around since 1589, before Oktoberfest was even a twinkle in some beer-lover’s eye. Not only is it one of the largest of the Oktoberfest beer tents, but it’s also one of only two tents with a standing-room-only area—an excellent idea for those who can’t always find seats for their butts but still want those beers. The Hofbräu Festzelt is the spot of Oktoberfest’s biggest parties and caters to a generally younger crowd. It’s decorated with about a gazillion hops with their official mascot, Aloisius, hanging from the ceiling, spinning around on his cloud. He’s proof that Heaven approves of your copious beer drinking. (Why his feet are so small, we do not know.)

This tent, known as Bavarian Heaven, has been blessing beer-drinkers’ lives since 1907. It’s the most well-known of the Oktoberfest beer tents thanks in large part to its gorgeous indoor decorating scheme—blue sky, clouds, Munich scenes, and the phrase Himmel der Bayern displayed larger than life—that was designed by Oscar winning set designer Rolf Zehetbauer. It has a roof that can be opened during nice weather, a revolving bandstand, and hosts the official Oktoberfest closing ceremonies when the lights are dimmed, the sparklers are lit, and all 9,300 visitors sing in unison to your favourite Oktoberfest music. 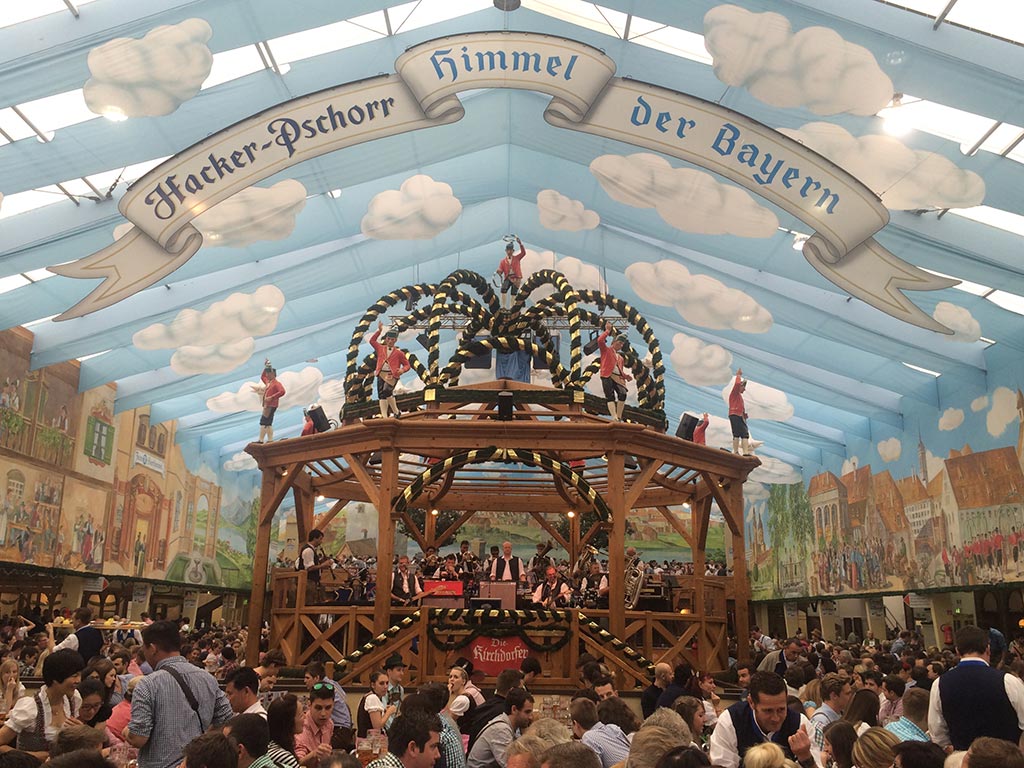 The Hacker beer tent has been serving beer since 1907

Augustiner is the oldest of Munich’s breweries and in dedication to this the Augustiner-Festzelt is the only Oktoberfest beer tent that serves their beer from traditional wooden kegs. It’s known as the “friendliest” tent at Oktoberfest so prepare to make a whole lotta new friends here. The Augustiner Festzelt is also the “family-friendliest” of the tents and hosts “Kids Day” on both Tuesdays of the festival where food and drink prices are lowered in honour of their pint-sized visitors. (Man, we are on a roll here!) 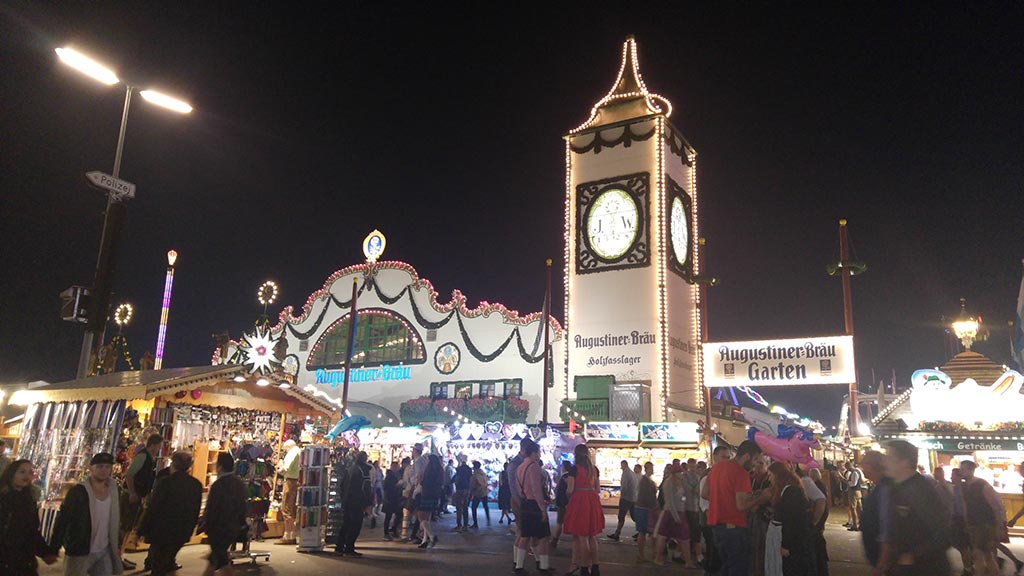 To find the Löwenbräu tent, follow your ears to the sound of a giant lion roaring… burping… what really is that sound anyway? The signature Löwenbräu lion mascot sits a whopping 37 metres above the crowd and the Oktoberfest beer tents, drinking his beer and making some sort of sound afterwards. He’s giving you a preview of what’s to come inside the tent that is, for whatever reason, a favourite among Italian visitors. The atmosphere is, to the surprise of no one, one massive party.

The Pschorr-Bräurosl has been around since 1901 and they really treasure their traditional Bavarian roots here. In this tent you’ll find they have their own unique take on Oktoberfest entertainment with their very own yodeller and some mind-blowing whip-snappers. But what makes this tent really popular, and probably isn’t completely unrelated to the whips, is what happens here on the second day of Oktoberfest: Gay Sunday—an event that has become an annual favourite among gay and lesbian locals as well as international visitors.

Enter the tent that looks most like an oversized hunting lodge and grab yourself a Paulaner. The “Armbrustschützenzelt” is the “crossbow hunter’s tent” and it’s here that you’ll find the annual Oktoberfest crossbow shooting competition. Nope, nothing about that sounds troubling. It’s been a thing since 1935 and we feel like that’s plenty of time to have worked out any kinks—so you’re totally in good hands here.

The Armbrustschützenzelt is home to the Oktoberfest crossbow shooting competition

This tent started out as an ox rotisserie in 1881 and has since become a major Oktoberfest beer tent that still serves a good ox (or 100). Their love of (eating) the ox is apparent before you even enter the joint—you’ll see a massive ox “roasting” on the outside of the tent. They serve about 90 oxen over the course of Oktoberfest and, as an added bonus that’s only a little disturbing, they display the name and weight of each of the seven oxen cooked each day inside the tent.

Sitting just at the feet of the Lady Bavaria statue, this tent is known for their great music and their famous suckling pig. But what makes this one stand out among most other Oktoberfest beer tents is the fact that they also sell liquor and wine in the Schützen-Festzelt. Just like its older brother, the Löwenbräu-Festhalle, the Schützen-Festzelt prides itself (get it? ‘cause lions?) on providing visitors a damn good time.

The Marstall is the newest of all the Oktoberfest beer tents having just opened in 2014. It replaced the Hippodrom and is the other tent, besides the Hofbräu Festzelt to offer standing room only. The tent plays homage to Oktoberfest’s equestrian roots and the horse theme can be found everywhere—from the carriage horses welcoming you on the outside of the tent, to the rotating carousel bandstand. It’s the first beer tent when you enter the Wiesn and totally worth being your first stop.

We know an Oktoberfest fish tent doesn’t sound all that appealing, but hear them out. Their smoked fish is Munich famous and shouldn’t be passed up. The Fischer Vroni is the other tent to use traditional wooden beer kegs and the fact that there is an actual giant ship in the centre of the tent is worth a visit alone.

Because this is one of the smaller of the Oktoberfest beer tents, it’s also the most exclusive. It is at the Käfer’s Wies’n-Schänke here that you’ll find local and even international celebrities—if you can get in, that is. It’s one of the two tents that are open late, 1:00 am to be exact, but it often takes knowing the right people to get in. The beer tent designed to resemble more of a tavern than a tent and is another high rank on the cosy scale.

Whether you speak German or not, it should be obvious by this point that this is the wine tent. While they do sell mostly wine (more than 15 different kinds) and champagne, they do sell ½ litres of Paulaner Weißbier if grapes and bubbles aren’t your thing. Drop your oma off here. 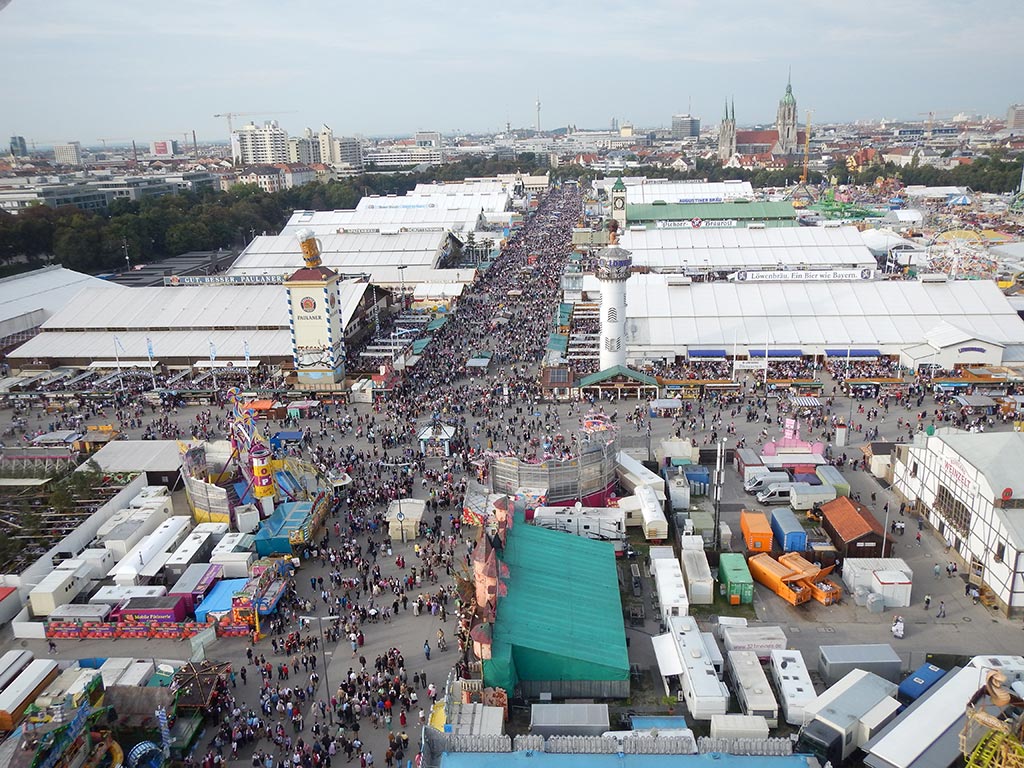 There are 14 major beer tents at Oktoberfest in Munich

Don’t forget about the Oide Wiesn!

Did you know there’s a section of Oktoberfest carrying on the look and feel of the original Oktoberfest? It’s called the Oide Wiesn and you shouldn’t miss it. Travel back to 19th century Oktoberfest when monocles were hip fashion accessories and the cost of beer was chump change.

For a more laid-back, chilled-out Oktoberfest experience, head here to the 1800s. You’ll be entertained with traditional Bavarian music and dance, and maybe a handlebar moustache or two (here’s hoping!). Also, the Festzelt Tradition is the only one of the Oktoberfest beer tents that serves their beer in traditional stone mugs. Huzzah!

Another popular Oide Wiesn tent featuring the traditional Oktoberfest ways who’s also known for their comedians. We can’t imagine anything not being funny after a couple litres of brew.

⇢ In all but two of the tents, your butt needs to be in a seat in order to get a beer in your hand. For best results:

⇢ Always remember to tip the servers in the Oktoberfest beer tents. Oktoberfest karma can be a bitch.

⇢ There is no smoking in the Oktoberfest beer tents at all, ever, under any circumstances (or inside any Oktoberfest building for that matter, unless we’re talking fish here). Most tents have their own dedicated smoking sections.

⇢ Inside the Oktoberfest beer tents you’ll find large bathrooms with plenty of stalls; outside the tents you can follow the weird Cupids pointing their arrows at the nearest restrooms. Seriously, this makes no sense but it’s easy to remember.

⇢ The best tent at Oktoberfest is the tent you can get a seat and a beer in! No matter in which of the Oktoberfest beer tents you end up, you’re guaranteed to have the best time of your life.

And now that you’ve read all bout the beer tents? Get yourself to Oktoberfest in Munich of course! 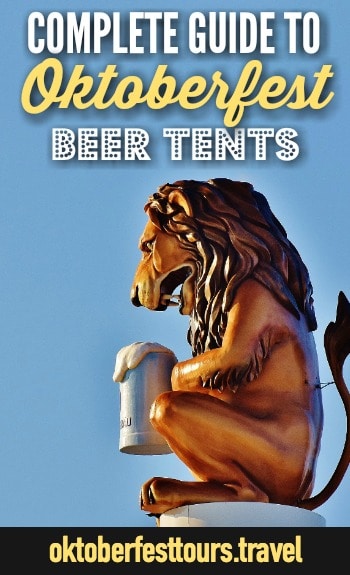