THE HISTORY OF OKTOBERFEST BEER CONSUMPTION

What started out as a relatively simple wedding celebration eventually ended up the way most wedding celebrations do—with a few of your friends and thousands of people you don’t know guzzling beer and dancing on tables like it’s their last night on Earth. Now while Oktoberfest beer consumption has always been something to be proud of, the celebration as we know it didn’t start out this way. What we know today as the “world largest beer festival” was once just “that really cool horse race party for those rich people.” It was supposed to be just a one-time thing but the people fell in love (cough cleavage cough). They wanted more horse races! More agriculture! More Beer!

Oktoberfest in Munich has its roots in small beer stands scattered throughout the fairgrounds that eventually became beer halls in 1896. Other than the size, they weren’t all that different than what we’re familiar with. Landlords owned them, breweries sponsored them, and no beer manufactured outside of Munich was allowed to be used for Oktoberfest beer consumption. Today, these tents can hold up to 10,000 of your closest, cleavaged friends. I think you could probably set the Electric Slide world record with that.

WHAT IS OKTOBERFEST BEER?

Oktoberfest beer consumption has gone through some slight changes over the years in terms of style, but thanks to the trusty ol’ reinheitsgebot the superb quality remains the same after 200 years. Will your wedding celebration be able to say the same? I don’t think so, Mrs. ShoulderPads PuffySleeves.

Traditionally, Oktoberfest beer was a marzen—a beer brewed in March, fermented in a cold cave somewhere during the summer, and tapped in the fall. Marzens are balanced, bread-y, and brilliantly brat-worthy. Today you can expect to find something a little different. Copper-red, sweet, and full-bodied—and I’m not just talking about your server. Today’s Oktoberfest beer consumption rests on the shoulders of the Vienna-style lager—the sexier, modern-day marzen.

Regardless of changes to style, one aspect of Oktoberfest beer consumption remains the same: all beer consumed at Oktoberfest is brewed within Munich city limits. Only beer produced by Munich’s big six are allowed to be served at the world’s largest beer festival: Hofbräu, Augustiner-bräu, Paulaner, Spaten, Hacker-Pschorr, and Löwenbräu.

The Oktoberfest beer consumption annual average is around 6.9 million litres of beer, with 2015 absolutely killing it with 7.7 million litres of beer consumed in those two weeks. In non-metric system terms, that’s over 2 million gallons on beer. That’s 131,234 kegs of beer. In two weeks. I don’t care how awesome your wedding reception was, it wasn’t 131,234 kegs of beer awesome.

DON’T GET HAMMERED. You don’t have to drink all 7 million litres yourself, bro. Beer corpses are not sexy. No one ever says, “See that guy/girl over there passed out on the curb with their knickers on backwards? That’s hot. I’m going to go introduce myself.”

EAT SOMETHING. Oktoberfest food is THE BEST and you’d be a fool not to scarf down anything you can get your grubby little hands on. Besides being delicious and hearty, eating while you drink is a pretty important step to rule #1.

DON’T STEAL THE BEER MUGS. Beer tent security officers confiscate anywhere between 90,000-120,000 glass beer mugs from people trying to steal them. Don’t be a statistic! Don’t be a thief! Also not sexy? Misdemeanours. You know what happens when 120,000 mugs are stolen? Money is lost. And do you know what happens when beer tents lose money? Beer prices go up. You wouldn’t want to be responsible for that, now would you?

MAYBE RIDE THE RIDES BEFORE YOU WORK ON YOUR CHUNK OF THOSE 7 MILLION LITRES. But that’s just my opinion. What goes down is bound to come up.

THE DRINKING AGE IN GERMANY IS 16. However, children of all ages are allowed in the beer tents. So don’t be surprised to see a teenager throwing back a few but when a toddler challenges you to a drink-off it’s okay to alert someone.

And however much you personally contribute to Oktoberfest beer consumption, always remember to TIP YOUR SERVER. 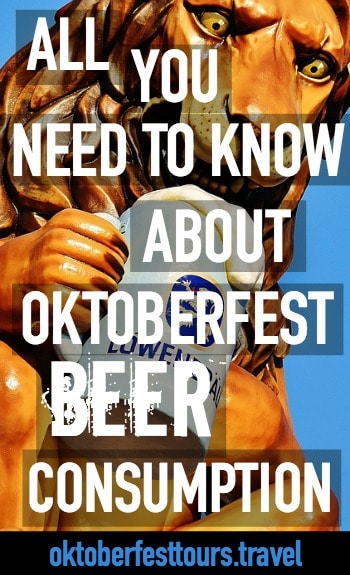