Read any article on tips for attending Oktoberfest in Munich, and you’ll no doubt see “avoid opening weekend” listed. This is not because Oktoberfest opening weekend is lame or anything—quite the contrary! The festival’s opening day especially is so bad-ass in fact, that it’s best avoided. Like how you’re not supposed to look at the sun or tickle great white sharks.

When we say “avoid Oktoberfest opening weekend”, that is always advice in response to “What’s the easiest way to get a spot in an Oktoberfest beer tent?” Now, say, if you were to ask us, “What’s the craziest thing I could do at Oktoberfest?”, we’d say, “ATTEND OKTOBERFEST OPENING WEEKEND!”

While 6 million people attend Oktoberfest annually, we’re pretty sure 5 million of them show up for opening day alone. Now while Oktoberfest opening day will be the most difficult time during which to snag a seat, that’s not to say it’s not one of the most sought-after Oktoberfest experiences. You can (and should) experience Oktoberfest opening weekend at least once in your life and, with the proper training, it may just be your favourite weekend ever. Keep avoiding great whites though—you’ll need your hands to hoist the beers, remember? 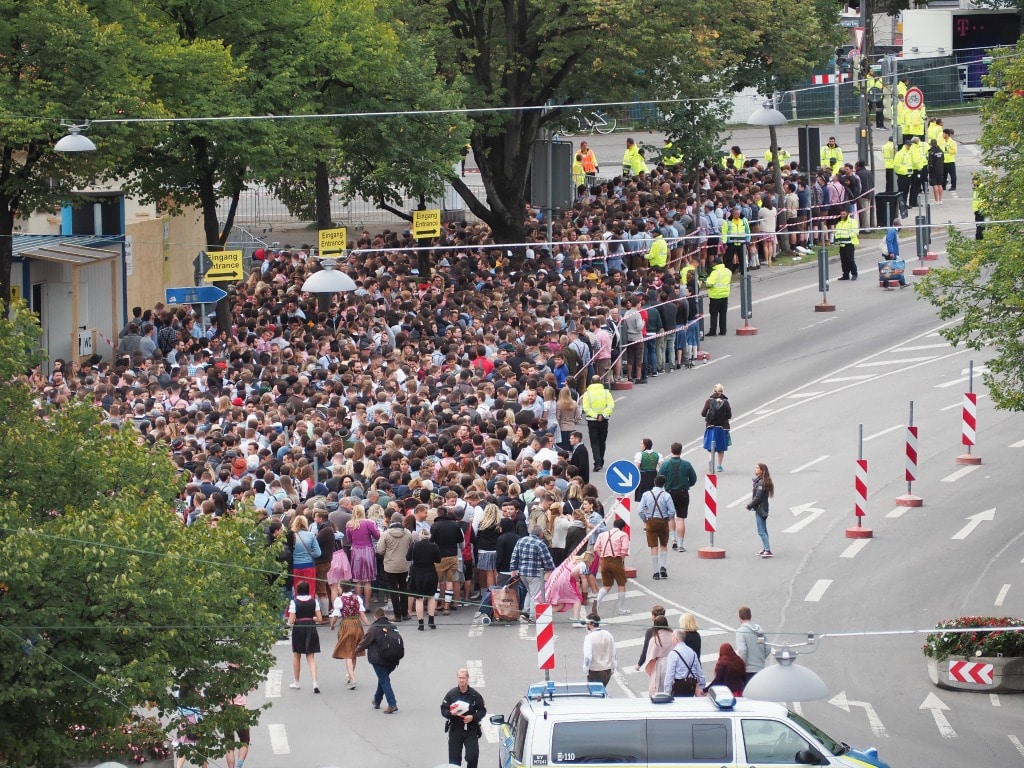 While a lot of it may just be impatience, a desperate thirst for festbier, and/or the need to be the first at everything, there are a handful of events that take place exclusively during Oktoberfest opening weekend that make it so popular.

OKTOBERFEST OPENING CEREMONY | Of course the world’s largest beer festival is going to have a just-as-epic opening ceremony to kick things off. Inside the Schottenhamel tent, Oktoberfest’s oldest, the Lord Mayor of Munich taps the first keg of the year and shouts, “O’Zapft Is!” (“It is tapped!”). There’s pomp, circumstance, and the beautiful Münchner Kindl standing by while you question all your previous feelings towards monks. It isn’t until this keg-tapping act that the beer can freely flow at Oktoberfest. Everyone pushes and claws (there’s probably a bite or two as well) in an attempt to drink the first beers of Oktoberfest.

OPENING DAY PARADE | Oktoberfest’s opening day parade consists of tent owners, landlords, event hosts and their families, and Munich’s local breweries on horse-drawn beer carriages and works its way from the Marienplatz in Munich city centre to the Theresienwiese. The parade is made up of about 1,000 participants, is lead by the Münchner Kindl, and makes a great consolation prize for those not willing to fight for their right to party (in the Oktoberfest beer tents).

TRADITIONAL COSTUME PARADE | Because one epic parade is not enough for a two-day weekend, duh. On Sunday of Oktoberfest opening weekend, the Traditional Costume Parade makes its way to the Theresienwiese from the centre of Munich. This parade consists of 10,000 participants and features traditional costumes and dancing, marching bands, fancy flag waving, and those beautiful horse-drawn beer carriages.

GAY SUNDAY | The first Sunday of Oktoberfest has been unofficially dubbed “Gay Sunday” with special fabulous events taking place in the Pschorr-Bräurosl tent from sun up to sun down probably whenever the sun comes back up again. Temporarily toss aside your oom pah pah for some Gaga and keep your eyes open for the guys with the whips. You’ll know them when you see (and hear) them.

Oh, so you think you’re brave, huh? Okay, okay. We can work with that. Just because getting a seat in a tent is a little tougher during the opening days of Oktoberfest doesn’t mean it can’t be done. Start here:

Arrive to the Theresienwiese early. And by ‘early’ we mean EARRRLLLLYYY. Nope, earlier than that. Keep going. The gates to Oktoberfest open at 9:00 am on opening day, so you’ll want to show up around 5 or 6am. At anywhere between 5,000 and 10,000 seats each, you’d assume there would be enough space in the tents to accommodate everyone who wishes to join Oktoberfest on opening day. Guess again! And what have you been told about assuming?

Have a game plan. Know which Oktoberfest beer tent you want to go to and know where it’s located within the festival grounds. Have a way to communicate with the rest of your group when (not ‘if’) you get separated. (Opening day at Oktoberfest is an every man for himself situation if there ever was one.) Prepare to make a beeline.

Wear good running shoes. Repeat, THIS IS NOT A DRILL. As soon as the clock strikes 9 and the Theresienwiese opens, tens of thousands of people run as fast as they can to get a spot in their favourite tent. Keep up or get knocked down. (See video below if you don’t believe us.) Maybe practice your 100-yard dash for a few weeks leading up to Oktoberfest too? Add in a few hurdles for good measure. #mandown

Bring something to kill time. For both when you’re in line hours before the Wiesn opens and while you’re sitting in the tent. On Oktoberfest opening day, the festival grounds open at 9:00 am but beer can’t be served until the mayor taps the first keg – at NOON. That’s three hours you’ll need to occupy. Playing cards and cell phone games are popular.

Do I need tickets to opening weekend? | Absolutely not! Oktoberfest (getting into the Wiesn and into the tents, that is) is open to the public and 100% free all day, every day. However, the beer, food, rides, souvenirs, and lapses in judgment are all on you.

Do I need a reservation? | Absolutely not! Follow our tips for enjoying opening weekend of Oktoberfest and you should have no problem. Beer tent reservations help, obviously, but getting them for opening weekend is going to be damn near impossible. Unless you know the right people, nudge nudge.

Think you have what it takes to attend Oktoberfest on opening weekend? If not, check out our Oktoberfest munich for the experience of a lifetime.

Need to save this info? Pin it on Pinterest! 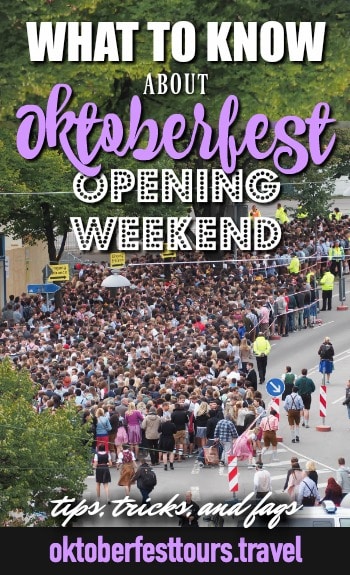